America Letter: Unlikely that all 50 states will have postal voting systems by November 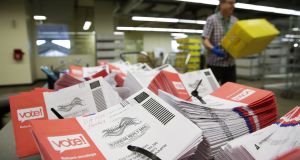 Empty envelopes of opened vote-by-mail ballots for the presidential primary are stacked on a table in Renton, Washington, March, 2020. Photograph: Jason Redmond/AFP via Getty

In one of her increasingly frequent interventions in the public sphere, Hillary Clinton delivered an icy put-down on Twitter this week.

“I can’t believe I have to write this sentence, but the president’s son-in-law doesn’t get to decide when the election is,” she wrote.

Clinton was referring to a Time magazine interview with Jared Kushner, adviser to president Donald Trump. When asked if November’s presidential election could be postponed due to coronavirus, Kushner replied: “I’m not sure I can commit one way or the other, but right now that’s the plan.”

His comments sparked alarm among Democrats. Neither White House officials nor the president have the authority to alter the election date.

Under a law dating from 1845, the presidential election must be held on the Tuesday after the first Monday in November. An act of Congress is needed to change the date, a decision that would be subject to a majority vote in both the Senate and House of Representatives (currently controlled by Democrats.)

Kushner later moved to clarify his comments, stating that he had not been involved in or aware of any discussions about changing the election date.

For his part, Trump has indicated he is happy with the date.

Asked about claims by his Democratic rival Joe Biden that the president could “try to kick back the election somehow, come up with some rationale why it can’t be held”, Trump responded: “November 3. It’s a good number. No, I look forward to that election.”

But while Trump has indicated that the date is here to stay, there are increasing signs that the president could seek to undermine the election in other ways.

As the coronavirus pandemic has forced several states to delay their primaries and diminished the likelihood of an in-person Democratic or Republican convention in August, postal voting is now being viewed as essential to a safe and fair election in November.

Every state in America offers some alternative to in-person voting at election time. However, some states are more restrictive than others. In many states, voters who want to vote by post must have a reason why they can’t turn up on polling day; in other states, postal ballots are automatically sent to voters.

Five states, including Washington and Colorado, have moved completely to a vote-by-mail system. California has also massively expanded its postal voting system in recent times. Governor Gavin Newsom announced this week that all registered voters will be sent postal votes for the first time this year, though voters will still be able to cast their vote in person in November.

In reality, however, it is unlikely that all 50 states will have a system of postal voting in place by November. The logistical challenges in establishing a vote-by-mail system are enormous – from ensuring that all voters’ addresses are up to date, to sourcing the right-sized envelopes and ballots.

Equally challenging will be political opposition to the move. The Republican establishment has long expressed scepticism about postal voting, arguing that it can lead to electoral fraud. In reality, research by the Brennan Center and other institutes has found that instances of electoral fraud due to postal voting are extremely rare. Democrats instead suspect that the real reason for Republican disapproval is fear that it will increase the Democratic vote.

As Trump said last month, “you’d never have a Republican elected in this country again”, if postal voting was adopted.

Again, however, research shows that postal voting does not benefit either party. Indeed the surprise victory this week by the Republican candidate in a special election in California, which was conducted primarily by mail, undermines the Republican argument.

Nonetheless, the president is likely to continue to warn of the dangers of voting by mail ahead of the election. The issue is also likely to resurface in the forthcoming negotiations on another Covid-19 stimulus package following Democrats’ success in securing funding for election preparation in the last deal.

Democrats insist that states must be prepared – they don’t want a repeat of last month’s Wisconsin primary, which saw thousands of people forced to vote in person in the midst of a pandemic.

American history – even in recent years – is filled with egregious examples of voter suppression, whether by gerrymandering, or overly-restrictive voter ID requirements.

Democrats will be hoping it does not happen again this year. For Trump, however, sowing doubts about the integrity of the electoral system may offer a handy scapegoat if he loses the election in November.