Islamic State likely to have time and space to target West, US inspectorate says 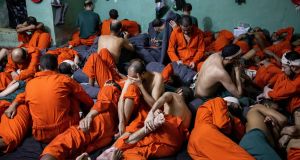 The Pentagon has said that the US withdrawal of troops from northern Syria has enabled Islamic State to revive and fortify and pose a fresh threat to the region and the world.

Islamic State (also known as Isis) has “exploited the Turkish incursion and subsequent drawdown of US troops to reconstitute capabilities and resources within Syria and strengthen its ability to plan attacks abroad”, the department of defence’s Office of Inspector General revealed. It also said Islamic State “will likely have the time and space to target the West and provide support to its 19 global branches and networks”.

“In the long run, it will probably seek to regain control of some Syrian population centres and expand its global footprint,” the inspector general added, citing the defence department’s investigation office. He said the killing of Islamic State leader Abu Bakr al-Baghdadi by US special forces “would likely have little effect on [Islamic State’s] ability to reconstitute”.

Last month, President Donald Trump decided to pull out the remaining 1,000 US forces from the Syrian-Turkish border zone although their presence had, until then, prevented a threatened Turkish invasion.

Ankara seeks to cleanse Kurdish forces, which it brands as terrorist due to a connection with rebel Turkish Kurds. This has led to the expulsion of Kurdish forces from a 120km-long and 30km-wide Turkish occupation zone agreed by Turkey, the US and Russia. The aim of this deal was to prevent an all-out Turkish invasion of the Syrian side of the 900km border.

The Kurds were forced to redeploy to defend the area they hold, reducing units involved in the anti-Isis campaign, and enabling the escape of several hundred Isis fighters from Kurdish prisons.

Attacks by jihadis in the border zone against Turkish troops, Ankara’s surrogate-Syrian militiamen and the Kurdish-held city of Qamishli, have been mounted. The Pentagon report coincided with Russian criticism of a statement by Turkish foreign minister Mevlut Cavusoglu, who argued the US and Russia had not fulfilled their obligation to clear Kurdish fighters from the border area and threatened further military action if they were not expelled.

Russian defence ministry spokesman Maj Gen Igor Konashenkov denied the Turkish accusation. He said: “Thanks to a range of measures implemented by the Russian Federation, it was possible to significantly stabilise the situation.”

He added that Russia had separated warring sides, mounted joint patrols with the Turkish army and dispatched military police to the border. He said the Turkish foreign ministry’s “call for military action can only escalate the situation rather than sort things out”.

Turkish president Recep Tayyip Erdogan told parliament that Turkey would continue military operations. “Notably, in Syria and northern Iraq, our fight will continue until all terror threats towards our country end and the last terrorists neutralised.”

While claiming to be engaged in an anti-terrorist campaign, Erdogan also insists Turkey must occupy a wide belt of Syrian territory so Ankara can deport to a “safe zone” 3.5 million Syrian refugees who have become a burden and are unpopular with many Turks.