US Politics: Passports failing to supersede parties as conflicts of day are intra-national 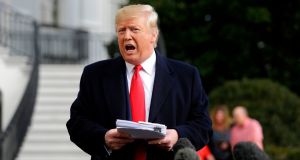 US president Donald Trump: If so many swear by “their” president, at all costs, then country cannot be the highest loyalty. Photograph: Joshua Lott/AFP

The world is now three years into the vaunted revival of the nation state. As you can see, citizens are setting aside their differences and embracing under the flag. Other loyalties they might feel – to their politics, to the global commons – have succumbed to the one true form of human belonging. “Oh, get a room,” you sigh, as they frolic and high-five. Just look at the watertight cohesion of the US. Just look at the togetherness of the UK.

If the tone here is farcical, then so, looking back, was the triumphalism of 2016. Remember, nationalists did not just say that nation states should recover formal powers from global entities. That would be an entirely respectable statement of preference. They said the nation state is the ultimate locus of people’s identity. Hence the huge vote for Donald Trump as US president and that other nationalist proposition, Brexit.

Globalists have been asked to do a lot of self-examination since then. Nationalists will forgive me if I ask them to return the favour. It is just that lots of citizens turn out to be at least as attached to their political tribe as to their nation. They put country first, as long as it is governed on their terms. This was true before 2016 but the schism has deepened ever since.

A significant minority of Americans would vote for Trump regardless of what he does. More than a third of Republicans and almost half of Democrats would be somewhat or very unhappy if their child married someone who favoured the opposing party. The new edition of the Atlantic, an unhysterical magazine, has “How to stop a civil war” as its cheering title.

The point here is not to deplore political division. That has been done, in spades, to zero effect. The point is to wonder how it squares with the idea of nationhood as the glue of all glues. If nationalists were right, then citizens with opposing politics would have found a modus vivendi by now. Passport would supersede party as that which defines them. For millions of people – enough to be a problem, anyway – it has not. The conflicts of the day are intra-national.

It is not enough to say that the nation state would be in robust form, if only the other side would get behind it. For one thing, there was no “if” in the nationalist argument before. For another, it is not as if their own side, the right, is squeamish in partisan combat.

No, an honest nationalist has to admit that national identity has turned out to be weaker under stress than ever seemed possible. In all candour, it has been weaker than I, a horned and moustache-twirling globalist, ever believed. Or, indeed, hoped. Give me patriotism, even jingoism, over a feral politics in which one’s own team is never wrong. It is party that turns out to be the scoundrel’s last refuge.

Perhaps the surprise here is that anyone is surprised. Although we talk about the nation state as though it predates the big bang, it is a couple of centuries old. Its record includes the second World War.

To the extent that it has prospered since 1945, it has done so within the limiting corsetry of the Bretton Woods institutions, the EU, the UN and various security guarantees. Humans have spent more time in multiethnic empires or sovereign cities or ungoverned spaces. Unless we are to believe that this was so much teleological foreplay before the end-state of nationhood, we are not hard-wired for one type of government.

If so many swear by ‘their’ president, at all costs, then country cannot be the highest loyalty

None of which is to pretend that globalism has a better claim on human sympathies. No one feels a tingle in their heart for the Basel Committee on Banking Supervision. No one dies in a trench for the International Monetary Fund. More likely, people have layered identities, and nationalism puts more weight on one of these layers than it can bear.

History might record that few worse disasters befell nationalists than their own breakthrough in 2016. It led to the stress-testing of the thing they cherish, with unforeseen consequences. Who would bet on Britain even retaining its territorial integrity a decade hence?

Trump once said that he could gun someone down in public and retain the support of his base. People dwelt on the statement’s lurid imagery, or its regrettable accuracy. But something else about it was missed. It directly contradicts his nationalism. If so many swear by “their” president, at all costs, then country cannot be the highest loyalty.

“The nation state remains the true foundation for happiness and harmony,” he said, plausibly, in 2016. The intervening years have tested the claim. Some harmony. Some foundation. – Copyright The Financial Times Limited 2019