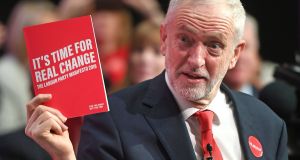 British Labour leader Jeremy Corbyn unveiled the party’s most leftwing election manifesto in a generation on Thursday including a pledge to increase taxes by £82.9billion (€97bn) a year with the vast majority falling on big business and the wealthy.

The party’s manifesto, unveiled at an event in Birmingham, promises a host of radical policies if the party wins power in the UK’s general election on December 12th. It includes a wave of nationalisations, higher taxes on big business, huge borrowing for capital investment and extra money for the National Health Service, social care and schools.

But the tax increases - much larger than the £48.6 billion of extra annual tax and spending in the party’s 2017 election manifesto - was one of the most eye-catching announcements made by Mr Corbyn on Thursday.

He described the policy proposals as “the most radical and ambitious plan to transform our country in decades”.

The latest manifesto sets out plans to raise £14 billion a year from changes to capital gains tax so that gains are taxed at the same level as income tax. In addition to an increase in corporation tax from 19p to 26p, the manifesto includes a new way of taxing multinational corporations to raise £5.8 billion a year. Under the approach, corporate groups under common ownership will be treated as “unitary enterprises” so that profits are declared where economic activity occurs and where value is created.

The financial transactions tax would be extended in order to raise £8.8 billion a year, while another £5 billion would be raised by reversing recent cuts to inheritance tax, imposing VAT on private school fees, scrapping the married person’s allowance and introducing a second homes tax.

Mr Corbyn said he accepted his new tax rises would be unpopular with the rich but insisted: “We will make those at the top pay their fair share of tax to help fund world-class public services.”

Labour also announced a new windfall tax on oil and gas companies that could raise more than £11 billion.

The oil levy would be used to pay for what Labour described as a “just transition fund” providing an £11bn support package to help retrain 37,000 workers in the industry to “make the transition to a clean economy”.

The party wants to raid UK-based oil and gas companies that have extracted oil and gas from the North Sea because it believes the UK has collected less tax per barrel than other countries such as Norway and the Netherlands.

“Had the UK charged the same effective tax rate as the average rate charged by North Sea countries from 1992 to the present day, it would have collected an additional £117 billion in taxes,” a Labour official said.

Labour claims the tax should have no effect on prices for consumers at the pump because oil prices are determined by the global oil market. But trade unions have been fighting a rearguard action against the idea of the tax since it was discussed at Labour’s manifesto meeting last Saturday because they are concerned about its impact on the industry.

The announcement is part of Labour’s plan for a total overhaul of the UK economy to shift it towards a low-carbon future, with a new £250 billion “green transformation fund” - all funded by borrowing - to pay for policies including millions of electric car loans and a fleet of new state-controlled offshore wind farms.

The party will also commit to a radical plan for the UK to produce net zero carbon emissions by 2030 - 20 years earlier than the current government target - although the wording will allow some wriggle room on meeting the target.

The party is planning a series of nationalisations, £400 billion of new borrowing and higher taxes on high earners and big business to fund better public services. The party would also introduce “inclusive ownership funds”, which would seize 10 per cent of the shares in every big company in the UK and hand them to workers over a decade.

Some shareholders are threatening legal action if - as expected - their stakes are to be nationalised at below market price.

Mr Corbyn is struggling to cut through in the election campaign, with his party languishing behind the Conservatives in most opinion polls.

Responding to the publication of Labour’s manifesto the Conservative MP and home office minister Brandon Lewis described it as a “reckless spending spree” and accused Mr Corbyn of not having a plan for Brexit. – The Financial Times Limited