Netanyahu decries ‘coup’ attempt as he is charged with corruption 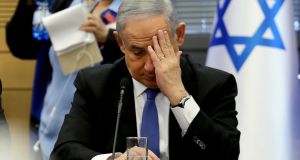 Israeli prime minister Binyamin Netanyahu during a meeting of the right-wing bloc at the Knesset (Israeli parliament) in Jerusalem on Wednesday. Photograph: Gali Tibbon/AFP via Getty Images)

Israel’s attorney general has charged prime minister Binyamin Netanyahu with fraud and breach of trust in three separate corruption cases, making him the first prime minister in Israeli history to be indicted while still in office.

According to the indictment, Mr Netanyahu “damaged the image of the public service and public trust in it” and abused his position and status, knowingly “taking a bribe as a public servant in exchange for actions related to your position”.

In a live television address, Mr Netanyahu launched a bitter attack on Israel’s law enforcement agencies, accusing them of plotting “a coup” to topple him from power. He vowed to remain as prime minister while he fights to clear his name, describing the judicial process against him as “tainted”.

Opposition politicians called on Mr Netanyahu, Israel’s longest-serving leader, to step down immediately, saying the indictment marked the beginning of the end of the “Bibi” era as he has lost all moral justification to remain in office.

The most serious of the three cases against Mr Netanyahu, known as Case 4,000, is the only one involving bribery charges.

It alleges that Mr Netanyahu, when he also served as communications minister between 2015 and 2017, ensured financial benefits amounting to hundreds of millions of euro for Bezeq, Israel’s largest telecommunications company, which was owned by businessman Shaul Elovitch. It’s alleged that this was done in return for favourable coverage for Mr Netanyahu and his wife Sara on the popular news website Walla! also owned by Mr Elovitch.

In Case 1,000, Mr Netanyahu is alleged to have received gifts worth €230,000, included cigars, pink champagne and jewellery, from wealthy friends.

Mr Netanyahu has always denied all the charges, saying he is the victim of a left-wing and media witch hunt designed to overturn the will of the electorate.

Attorney general Avichai Mandelblit will now ask the Knesset to waive Mr Netanyahu’s immunity, a process that can take 30 days. It is expected Mr Netanyahu will ask his political supporters to oppose such a move.

The attorney general’s decision in effect marks the end of efforts to form a national unity government following September’s inconclusive election, meaning Israel is facing its third election within a year.

Earlier on Thursday, President Reuven Rivlin informed the speaker of the Knesset parliament that both main parties – Likud and Blue and White – had failed to cobble together a working coalition.

Parliamentary deputies now have 21 days to nominate a candidate who can muster the support of a majority 61 members of the 120-seat Knesset, but such a scenario is extremely unlikely.

Mr Rivlin, who drew up a draft framework for a unity government including Likud and Blue and White, told Knesset speaker Yuli Edelstein: “This is a time of unprecedented darkness in the history of the state of Israel.” He urged deputies to show “statesmanship” by working together to prevent new elections.

The September elections, the second this year, ended up with the centrist Blue and White, led by former top general Benny Gantz, winning the most seats,33, compared to 32 for Mr Netanyahu’s ruling Likud.