US ambassador to EU delivered explosive inquiry evidence on Wednesday

US envoy to the EU, Gordon Sondland, has told an impeachment inquiry that the White House conditioned a meeting with Ukraine's president on that nation opening up investigations into one of Donald Trump's political rivals. 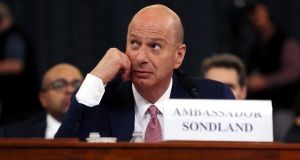 Gordon Sondland, the US ambassador to the European Union, testifying before the House intelligence committee on Wednesday. Photograph: Chip Somodevilla/Getty Images

Gordon Sondland, the US ambassador to the European Union, delivered explosive testimony to the House intelligence committee on Wednesday in the latest round of public hearings in the impeachment inquiry. In his opening statement, Sondland directly implicated members of the Trump administration – including President Donald Trump himself – in a pressure campaign on Ukraine to launch investigations into Trump’s political rivals. Here are some key takeaways from Sondland’s testimony.

Sondland: ‘We followed the president’s orders’

Opening statement, Page 4: Secretary Perry, Ambassador Volker and I worked with Mr. Rudy Giuliani on Ukraine matters at the express direction of the President of the United States. We did not want to work with Mr. Giuliani. Simply put, we were playing the hand we were dealt. We all understood that if we refused to work with Mr Giuliani, we would lose a very important opportunity to cement relations between the United States and Ukraine. So we followed the president’s orders.

– Sondland told the committee that Trump directed the Ukraine pressure campaign, that secretary of state Mike Pompeo signed off, and that vice-president Mike Pence was told about an apparent link between Ukraine’s military aid and the investigations the president desired. He confirmed that there was a “clear quid pro quo” for a White House meeting between Trump and Ukraine’s president.

Trump’s priority was that the Ukrainians had to announce that they would start the investigations, Sondland said

Q: “Now, for Mr Giuliani by this point, you understood that in order to get that White House meeting – that you wanted President Zelenskiy to have and that President Zelenskiy desperately wanted to have – that Ukraine would have to initiate these two investigations. Is that right?”

A: “Well, they would have to announce that they were going to do it.”

Q: “Right. Because Giuliani and President Trump didn’t actually care if they did them, right?”

A: “I never heard, Mr Goldman, anyone say that the investigations had to start or had to be completed. The only thing I heard from Mr Giuliani or otherwise was that they had to be announced in some form and that form kept changing.”

– Sondland explained to the Democrats’ chief counsel that Trump’s demand on Ukraine seemed to prioritise the announcement of investigations into his rivals more than it did completing an actual investigation. As far as Trump was concerned, Ukraine’s announcement that it was investigating the Bidens as part of President Volodymyr Zelenskiy of Ukraine’s anti-corruption agenda could be damaging enough.

‘Everyone was in the loop’: Sondland cast blame on senior administration officials

Sondland told lawmakers about interactions with senior administration officials who have tried to keep some distance from the pressure campaign. He mentioned Pence, Pompeo and the president’s acting chief of staff, Mick Mulvaney, dragging them further into the circle of people who knew about Trump’s and Giuliani’s Ukraine foreign policy plan.

“I Talked to Zelenskiy just now? He is prepared to receive Potus’s call. Will assure him that he intends to run a fully transparent investigation and will ‘turn over every stone’. He would greatly appreciate a call prior to Sunday so that he can put out some media about a ‘friendly and productive call’ (no details) prior to Ukraine election on Sunday.”

Chief of staff Mick Mulvaney responded: “I asked NSC to set it up for tomorrow.”

He also mentioned Trump’s former national security adviser John Bolton, testifying that he was surprised that Bolton had called him in late August to request Giuliani’s contact information before a visit to Kiev.

Sondland told lawmakers that Giuliani was asking for a “quid pro quo” – a visit to the White House for Zelenskiy in exchange for a “public statement” announcing corruption investigations into widely debunked theories that could benefit Trump politically.

He contradicted other witnesses, saying there was only one channel of foreign policy with Ukraine.

Opening statement, Page 4-5: We made every effort to ensure that the relevant decision makers at the National Security Council and the State Department knew the important details of our efforts. The suggestion that we were engaged in some irregular or rogue diplomacy is absolutely false.

I have now identified certain State Department emails and messages that provide contemporaneous support for my view. These emails show that the leadership of the State Department, the NSC, and the White House were all informed about the Ukraine efforts from May 23, 2019, until the security aid was released on September 11, 2019. I will quote from some of those messages with you shortly.

Page 6: Any claim that I somehow “muscled” my way into the Ukraine relationship is simply false.

– Contradicting testimonies from other witnesses, Sondland denied the idea that there was a back channel with Ukraine that was operating in the shadows of the typical foreign policy portfolio. – New York Times