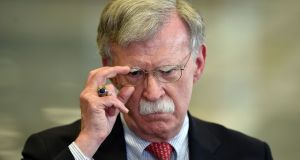 The US House of Representatives will hold its first full vote on the impeachment inquiry into President Donald Trump on Thursday, as former national security adviser John Bolton was summoned to appear before committees next week.

Mr Bolton, who left the White House this summer, was requested to appear before investigators as part of their impeachment inquiry. It is not yet clear if he will appear.

The development came as further witnesses testified about the Trump administration’s Ukraine policy on Wednesday.

She said that she documented multiple calls from Mr Livingston while she was working at the National Security Council.

“He characterised ambassador Yovanovitch as an ‘Obama holdover’ and associated with George Soros, ” she said according to her written testimony submitted to the committee. “It was not clear to me at the time – or now – at whose direction or at whose expense Mr Livingston was seeking the removal of ambassador Yovanovitch.”

It is not clear why Mr Livingston was lobbying for Ms Yovanovitch’s removal. The long-serving diplomat was recalled early from Kiev where she was serving as US ambassador to Ukraine earlier this year. In her testimony to the inquiry earlier this month she said that she had been told by deputy secretary of state John Sullivan that she had done nothing wrong when she was recalled to Washington in May, but had to return on the “next plane”.

A White House transcript of a phonecall between Mr Trump and Ukrainian president Volodymyr Zelenskiy on July 25th reveals that Mr Trump described Ms Yovanovitch as “bad news” during the phone call. Ms Yovanovitch suggested during her testimony that Rudy Giuliani, the president’s personal lawyer, was involved in the pressure campaign for her removal.

Ms Croft, who worked as an assistant to former Ukraine ambassador Kurt Volker, also recalled a meeting she attended with Mr Volker and former national security adviser John Bolton on June 13th during which concerns about the role of Mr Giuliani on US foreign policy were discussed.

Ms Croft and a second state department official, Christopher Anderson, testified before the committees yesterday. Both worked as assistants to Mr Volker.

Separately, Mr Sullivan, the deputy secretary of state who oversaw Ms Yovanovitch’s removal and has since been nominated by Mr Trump to become the next ambassador to Russia, attended a confirmation hearing at the Senate Foreign Relations Committee. Questioned in detail by senators about the circumstances of Ms Yovanovitch’s departure, Mr Sullivan said he had been informed by secretary of state Mike Pompeo that Mr Trump no longer had confidence in his ambassador. Asked by Democratic ranking member Bob Menendez if he believed Mr Giuliani was smearing Ms Yovanovitch, he replied: “I believe he was, yes.”

As more witnesses added fresh detail to the allegations surrounding Mr Trump’s relations with Ukraine, the House of Representatives prepared to take its first formal vote on the impeachment inquiry today after the House voted to advance the resolution in a key procedural development. The resolution sets out the next steps for the inquiry. It states that the House Intelligence Committee, under chairman Adam Schiff, will conduct open hearings, which could happen within the next two weeks.

The committee will then compile a report, while will be passed to the House Judiciary Committee. That committee could then draw up articles of impeachment against the president which would be put to a full vote in the House. While lawyers for Mr Trump will be permitted to take part in the open hearings and call witnesses, the Democrats, who are in the majority, have significant veto power over who appears.