‘You live with these men as a slave. It’s free for them to do anything’ 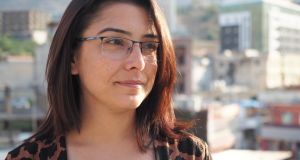 Naveen Rasho (25): was enslaved by Islamic State for five years and then detained by Kurdish forces along with her captor’s wives. Photograph: Lorraine Mallinder

As a captive of the Islamic State terror group, Naveen Rasho endured nearly five years of hell. She was in Baghuz, Syria, when the caliphate fell, and remembers scenes of smoke and fire and death, as coalition air strikes pounded jihadist positions in the desert village. The young Yazidi woman survived, only to be plunged into the fresh horror of al-Hawl detention camp, where she was imprisoned with her captor’s three brides.

Two and a half months later, Rasho heard that a foreign visitor was in al-Hawl, a Kurdish-run camp holding nearly 70,000 Isis relatives in northeast Syria. The camp, which has been a ticking time bomb since Turkey and its Syrian rebel proxies invaded the border area this month, was sliding into brutality. Female members of al-Hisbah, Isis’s morality police, threatened to burn or knife fellow prisoners disobeying their rigid edicts.

Rasho had one chance, and she seized it.

Before Islamic State, Rasho was a junior reporter with radio station Jabal Sinjar in the town of Sinjar, northern Iraq. She lived in a tight-knit community of Kurdish-speaking Yazidis, a long-persecuted group whose faith is rooted in Zoroastrianism. Clearly an independent spirit, she focused on her fledgling passion for the airwaves, occasionally sneaking out on dates. “I was the only one not getting married,” she laughs.

Quietly self-assured, the 25 year old has an inner stillness that is rarely shaken, even when revisiting the darkest times. Such as that hot day, on August 3rd, 2014, when her family heard rumours that Isis was approaching.

They fled by car, following the curve of Mount Sinjar, considered a protector of the Yazidi people, to her aunt’s house in the village of Herdan. “The savages were coming to get us,” she says. The family were captured in their car, forced to keep driving with Kalashnikovs from the surrounding vehicles pointing at them.

“Nobody spoke. We were finished,” she recalls.

Separated from her family, Rasho lost her bearings as she was transported back and forth, between Iraq and Syria. Then came “the lottery”. Along with other girls, she was made to write her name on a scrap of paper, which was placed in a box. One by one, their fates were thrown into the hands of the waiting jihadis. Rasho was given to one man, whom she names, then “gifted” to a number of other men in the months that followed. “You live with these men as a slave. It’s free for them to do anything to you,” she says.

She ended up with a doctor in his 30s from Damascus. He was a nervous man, prone to outbreaks of rage, mostly directed at Rasho. He had three wives, a German, a Bosnian and a Russian. The German, mother of his firstborn, called the shots, lording it over the other two, who gave birth in the three years that ensued. “The women were always arguing.”

Rasho slaved from dusk to dawn, breaking only for prayer. Among her endless duties, she also had to look after the three children. “I love kids. Because I looked after them, I grew to love them,” she says. Her emotions well up as she speaks of them, fondness giving way to a wave of anxiety so strong we have to break the conversation.

“Please stop writing,” she says, getting up to fetch some tea.

At one point, Rasho believes she and the family may have lived in the province of Idlib, in northwest Syria, where Islamic State leader Abu Bakr al-Baghdadi met his death in a US raid on Saturday, according to the White House. For a while, they settled in Mosul, Iraq, and, finally, in Baghuz. When the caliphate fell, Rasho remembers the three brides “shouting and crying”. Shrouded beneath her burka, she didn’t dare reveal her identity to the Kurdish ground forces who took them to al-Hawl.

In the camp’s foreign annex, holding about 10,000 Isis relatives from over 50 countries, Rasho made sure she wasn’t sharing a tent with her former tormentors. Under Kurdish control, the brides’ attitudes began to shift. “When they passed me, they would wave, smile at me and say hello,” she says, her expression lightening as she recalls the absurdity of it all. Aware she was Yazidi, others told her that she would be killed if she tried to escape.

In June, the febrile camp was abuzz with the arrival of documentary-maker Alan Duncan. A former soldier with the British army who had volunteered with the Kurdish Peshmerga in the war against Isis, he had managed to get past the camp’s security with his camera. Taking her courage in both hands, Rasho was cautious, telling him she knew of a Yazidi woman trapped in the camp, testing his reactions before revealing her identity.

For two excruciating hours, she waited, while the documentary-maker fetched a Yazidi leader from the nearby town of al-Hasakah, who could accompany him back to free Rasho. Terrified of word getting round, she planned to hide in a different tent if he didn’t reappear. On the drive home to her family in northern Iraq, sighting Mount Sinjar rising up in the distance, she burst into tears.

Back with her family in the town of Ba’adra, she discovered her beloved mother had died while she was away. This, she says, is the worst part of her experience. But, four months on, she’s eager to look ahead. “I’m fed up of talking about it,” she says. “But I know I have to let it out. I know I have to talk about it to get it out of my system.”

Her newfound freedom is still sinking in. “It’s a new life. I’m no longer living with Isis,” she says. “It’s like I’m living in a dream.”

According to official estimates from Iraqi Kurdistan’s Office of Kidnapped Affairs, about 6,500 male and female Yazidis were taken captive by Isis.

1 Harris agrees with PSNI that army council still oversees both Sinn Féin and IRA
2 Drug dealer loses codes for €53.6m bitcoin accounts
3 MV Alta: The unmanned voyage of the Ballycotton ‘ghost ship’
4 Varadkar says any Fine Gael deal would have to recognise strength of its vote
5 The close links between Sinn Féin and IRA untangled
Real news has value SUBSCRIBE