Johnson gearing up for NHS deal with Trump, claims Corbyn 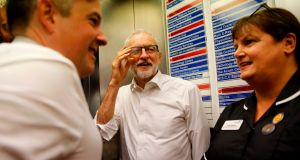 Labour leader Jeremy Corbyn at Crawley Hospital: “The US has called for ‘full market access’ to our NHS, which would mean prices of some of our most important medicines increasing by up to sevenfold.” Photograph: Tolga Akmen/AFP

Boris Johnson and Jeremy Corbyn have marked out the battleground for December’s UK general election in sharp clashes over Brexit, the National Health Service (NHS) and their leadership qualities. In the last prime minister’s questions before the campaign begins, Mr Corbyn accused the prime minister of putting the NHS on the table for a post-Brexit trade deal with Donald Trump.

The Labour leader cited a Channel 4 Dispatches report that British trade officials met representatives of US pharmaceutical companies five times to discuss drug prices for the NHS in the context of a future trade deal.

“The US has called for ‘full market access’ to our NHS, which would mean prices of some of our most important medicines increasing by up to sevenfold. While the government are having secret meetings with US corporations, it is patients here who continue to suffer,” he said.

Mr Johnson said his government was making a £34 billion (€39.9 billion) investment in the NHS that would pay for more hospitals, doctors and nurses. He attacked Mr Corbyn’s record on Russia’s role in the attempted poisoning of a former spy in Salisbury, Labour’s promise to reverse the privatisation of utilities and its approach to Brexit.

“It is all very easy to be an Islingtonian protester and say that you side with Russia over what happened in Salisbury, or say that you have a £196 billion programme of renationalisation, or continually flip-flop one way or the other – now eave, now remain – refusing to respect the verdict of the people in the EU referendum,” he said.

DUP deputy leader Nigel Dodds criticised the government’s failure to legislate for compensation for victims of institutional abuse in the North, who will now have to wait until after the election for the government to act. Parliament will be dissolved next Wednesday for a five-week campaign ahead of the election on December 12th.

Former home secretary Amber Rudd said on Wednesday she would not stand in the election after the Conservative party rejected her request to have the whip returned. David Lidington, who was Theresa May’s de facto deputy prime minister, also said he would be leaving parliament.

After prime minister’s questions, Mr Johnson made a statement to the House of Commons in response to the publication of the first part of a report into the 2017 fire at Grenfell Tower in London, which killed 72 people. The report criticised the actions of London Fire Brigade and said the tower did not meet building regulations.

It said many more lives could have been saved if the fire brigade abandoned its advice to residents to stay in their flats before it did so at 2.35am. It blamed the cladding on the outside of the building, which did not comply with regulations, for the speed with which the fire spread.

“I am very much aware that no report, no words, no apology will ever make good the loss suffered and the trauma experienced. But I hope that the findings being published today, and the debate we are holding this afternoon, will bring some measure of comfort to those who suffered so much. They asked for the truth. We promised them the truth. We owe them the truth,” Mr Johnson said.