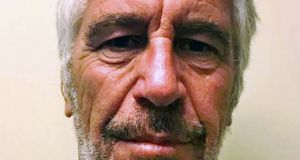 A forensic pathologist hired by Jeffrey Epstein’s brother said Wednesday that evidence suggested that Epstein did not die by suicide but may have been strangled.

The New York City medical examiner’s office concluded Epstein hanged himself in his jail cell while awaiting trial on sex trafficking charges. But the private pathologist, Dr Michael Baden, said on the morning TV show Fox & Friends that Epstein, 66, experienced a number of injuries – among them a broken hyoid bone – that “are extremely unusual in suicidal hangings and could occur much more commonly in homicidal strangulation.”

“I think that the evidence points to homicide rather than suicide,” said Dr Baden, who observed the autopsy done by city officials. Dr Baden, a former New York City medical examiner and a Fox News contributor, added, “I’ve not seen in 50 years where that occurred in a suicidal hanging case.”

The findings by Dr Baden were strongly disputed by the city’s chief medical examiner, Dr Barbara Sampson, who previously ruled that Epstein’s death August 10th in the Metropolitan Correctional Center was a suicide.

“I stand firmly behind our determination of the cause and manner of death in this case,” Sampson said. She added: “In general, fractures of the hyoid bone and the cartilage can be seen in suicides and homicides.” Dr Sampson also dismissed Baden’s contention that the circumstances around Epstein’s death suggested other people may have been involved. She said her office had done a “complete investigation,” taking into consideration information gathered by law enforcement in making the determination.

“No one finding can be taken in isolation,” she said.

The death led to several investigations into how a high-profile inmate apparently killed himself just weeks after he was placed on suicide watch after a failed attempt to take his own life. Epstein was a wealthy financier and convicted sex offender. He used his money and connections to get a widely criticised plea deal in Florida in 2008 after several teenage girls gave sworn statements to police stating that Epstein had sexually abused them at his mansion in Palm Beach, Florida. He spent 13 months in jail but was allowed to leave for 12 hours a day, six days a week.

In July, federal officials arrested Epstein at Teterboro Airport in New Jersey and charged him with sex trafficking. He was accused of luring numerous underage women to his homes in New York City and Florida then coercing them perform sex acts with him for money.

A spokesman for the US attorney’s office in Manhattan had no comment on Dr Baden’s statements about Epstein’s death. – New York Times