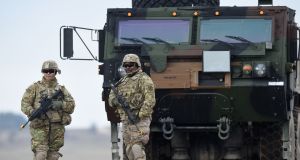 US soldiers in a military training area in southern Germany. The US is to cut its military presence in Germany by 11,900 troops. Photograph: Getty Images

The Trump administration is pulling nearly 12,000 troops out of Germany in a move set to add to tensions within Nato.

The decision comes after President Donald Trump last month vowed to cap US troops stationed in Germany at 25,000 unless Berlin spent more on defence for the transatlantic security alliance.

Defence secretary Mark Esper said on Wednesday that the US would start withdrawing about 11,900 troops “in a matter of weeks”, with about 5,400 relocating to other places in Europe and about 6,400 due to head back to the US. About 24,000 US troops will remain in Germany.

He told reporters the reduction would see some troops move east and “strengthen Nato, enhance the deterrence of Russia, and meet the other principles”, including reassuring allies.

However, critics have warned US withdrawal would undermine a strong symbol of Washington’s commitment to its European allies and embolden Russia, which has in the past been keen to exploit divisions between Nato members.

Richard Fontaine, chief executive of the Center for a New American Security think tank, said the decision was “a mistake”.

“The administration has offered no real rationale for the change other than as retribution for a Germany it sees as insufficiently committed to defence spending,” he said, adding that shifting units and installations from Germany to other European countries would be costly and undermine efforts to unify Nato allies.

Mr Trump on Wednesday described Germany as “delinquent”, asking why the US would keep all its troops there when it fell short on its spending commitments to Nato. Germany has “taken advantage of us for many years”, he told reporters.

Germany spent 1.3 per cent of gross domestic product on defence last year and is among the Nato members that have committed to meet a 2 per cent threshold by 2024.

A senior US defence official said it would cost potentially “billions of dollars” to build new housing on American soil for the returning US troops, although some of the 6,400 troops might return to Europe on a rotational basis.

Pentagon officials justified the decision by saying Germany was no longer “a frontline country” for US operations in Europe, and now serves as the central logistics hub.

General John Hyten, vice-chairman of the joint chiefs of staff, said on Wednesday the troop reallocation would “bolster” US commitment to its allies because it would “better distribute forces across Europe and increase the use of rotational forces”.

While critics said the move was likely to embolden Russian ambitions in Europe, a senior defence official said relocating troops would allow the US to react to “very aggressive Russian activity... and also increasingly aggressive Chinese posture in the Mediterranean, in southeastern Europe”.

Mr Esper described the shift as “a strategic laydown”, with the US redeploying troops “east into Poland”. He said there were also opportunities to move into the Baltics.

Despite framing the shift as a strategic effort to deter Russian and Chinese aggression in Europe, Mr Esper was also critical of Berlin.

“Germany is the wealthiest country in Europe. Germany can and should pay more to its defence,” he said.

The Trump administration has been at odds with chancellor Angela Merkel’s government in Germany over a host of issues, from defence spending and climate change to responses to China’s Hong Kong policy.

Some German media had earlier suggested Mr Trump had decided to withdraw troops in a fit of pique after Dr Merkel declined to attend a G7 summit he intended to host last month in the US, citing the coronavirus pandemic. Richard Grenell, who recently stepped down as US ambassador to Germany after two years in the job, told German media last month there was no connection.

Thomas Wright, an expert in transatlantic relations at the Brookings Institution, a Washington think tank, said: “This is all to do with Donald Trump’s deep-seated psychological hostility to Germany in general and Angela Merkel in particular. There’s no strategy.”

The Pentagon has spent months evaluating the number of troops stationed in Africa, the Middle East and Asia, and Europe, in line with Mr Trump’s call to bring back US troops. Officials said Mr Trump had made pulling troops from Germany his priority, and the US department of defence “moved to implement” that. – Copyright The Financial Times Limited 2020