Coronavirus: Victoria to make masks compulsory amid spike in cases 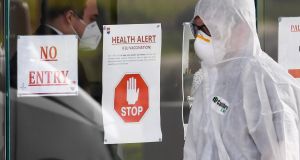 A medical worker enters the Epping Gardens aged care facility in the Melbourne suburb of Epping on Thursday as the city battles fresh outbreaks of Covid-19. Photograph: Getty Images

Masks have been compulsory in Victoria’s state capital of Melbourne and a neighbouring semi-rural district for the past week.

But Victorian premier Daniel Andrews said on Thursday that masks or other face coverings will be compulsory for the whole state beginning late on Sunday.

In addition, residents around the city of Geelong will not be allowed to have visitors in their homes from late on Thursday.

The 723 new cases exceeded the previous high of 532 cases posted Monday, while the state also reported a new daily high of 13 deaths.

Melbourne and neighbouring Mitchell Shire are halfway through a six-week lockdown, which Mr Andrews said could be extended.

On Monday prime minister Scott Morrison called for patience in the state.

“There has been significant community transmission in Victoria. That will take some time to get on top of,” Mr Morrison said. – PA