US jobless claims rise again as economy appears to stall 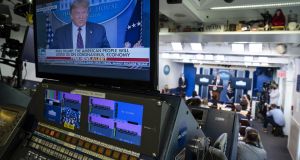 US president Donald Trump on a television monitor during a news conference on Tuesday. Photograph: Sarah Silbiger/UPI/Bloomberg

US treasury secretary Steven Mnuchin said Republicans would consider extending some emergency jobless benefits as data for the number of Americans filing for initial unemployment benefits showed the labour market’s recovery may be stalling.

New jobless claims rose to 1.42 million seasonally adjusted last week, compared with 1.31 million a week earlier, following Covid-19 outbreaks in parts of the US south and west. Economists had forecast that claims would match the previous week’s unrevised figure of 1.3 million.

It was the first time since early in the crisis that weekly applications for benefits have risen. The pace of first-time claims had gradually eased in each of the preceding 15 weeks since hitting a high of 6.9 million in March.

Weekly claims remain elevated, compared to a previous peak of 669,000 during the 2008-09 financial crisis.

“That initial unemployment claims are running at over 1.4 million per week this far into the onset of the crisis . . . and continuing claims remain so high provides a cautionary message about the difficulties involved and the time it will take to heal a labour market thrown into turmoil by unprecedented circumstances,” said Joshua Shapiro, chief US economist at MFR.

New claims in the US pandemic unemployment assistance programme, which extended aid to the self-employed or other individuals who would not qualify for regular unemployment compensation, rose to 974,999 from 955,272 on an unadjusted basis.

Economists have said the spread of coronavirus outside early hotpots in the US northeast and renewed curbs on some businesses in California, Texas and Florida threatened to slow the nation’s recovery from economic turmoil caused by the pandemic.

“The labour market remains in a precarious place as Covid-19 cases surge in some parts of the country and stricter measures are adopted in response,” economists at Oxford Economics said. “Claims data from the last few weeks point to layoffs and less rehiring in possible signs of job losses in July payroll employment.”

Mr Mnuchin said on Thursday that Republicans would consider extending supplemental jobless benefits as long as they replaced 70 per cent of workers’ lost wages as part of a new $1 trillion fiscal stimulus package that is being negotiated on Capitol Hill.

In an interview with CNBC, he said the Trump administration and senior leaders of his party would support the renewal of federal unemployment payments if they were reduced from their current level of $600 per week, which Republicans believe discourage people from returning to work.

Democrats have suggested extending them at current levels given the high levels of unemployment still afflicting the US economy.

Mr Mnuchin made the comments after a series of talks with Republican leaders to reach a consensus on their stimulus plan, which has triggered a backlash from rank-and-file conservatives within the party, complicating the effort.

Democrats have proposed an additional $3 trillion of stimulus, and contend that the Republican plan will fall far short of what is needed given that the new flare up in coronavirus cases has slowed down the US bounce back.

Mr Mnuchin said President Donald Trump now wanted to send money out to families as quickly as possible, including a new round of direct payments in August.

The president indicated this week that the next relief package would extend at least part of the supplemental jobless aid, saying employers are “having a hard time” rehiring workers.

The non-partisan Congressional Budget Office said that if the extra $600 in weekly aid is stretched until the end of January, about five of every six recipients would receive more in benefits than they would expect to earn from working.

The US treasury secretary said that while the price tag of the current bill being discussed would be about $1 trillion, the White House was open to yet another round of fiscal stimulus in the future if it was needed.

Data on the jobs market and consumer spending had previously provided early signs of economic improvement. After a record loss of 20.5 million payrolls in April, the US added a combined 7.3 million jobs in May and June amid a surge in hiring as the economy gradually reopened.

The number of Americans currently receiving jobless benefits dropped to 16.2 million from 17.3 million during the week to July 11th. Continuing claims were equivalent to 11.1 per cent of the workforce.

This so-called insured unemployment rate, which was 11.8 per cent the week before, is considered an alternative measure of joblessness. – Copyright The Financial Times Limited 2020