Trump to deploy ‘hundreds’ of federal troops to Chicago

Speaking at a White House event, Donald Trump blames “extreme politicians”, who he says are on an "anti-police crusade", for a spike in murders and shootings in major cities across the US. Video: Reuters 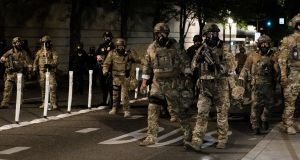 US president Donald Trump has announced that he will send “hundreds” of federal troops to Chicago to help combat rising crime in an expansion of his government’s intervention into local law enforcement.

Referring to a recent spike in crime in Chicago, he claimed that “murderers and violent criminals are breaking a wide range of federal laws.”

A further 35 federal agents are being sent to Albuquerque, New Mexico,

Speaking at an event in the White House, Mr Trump criticised “extreme politicians” who wanted to abolish the police, claiming that efforts to “shut down policing” were behind a spike in murders and shootings in major cities across the United States.

Mr Trump painted Democrat-led cities as out of control and lashed out at the “radical left,” which he blamed for rising violence in some cities, even though criminal justice experts say it defies easy explanation.

The announcement marks the latest move by the president to highlight his law and order credentials ahead of November’s presidential election.

“Every American no matter their income, their race, or their zip code should be able to walk their city’s streets free from violence and free from fear,” he said. “The Department of Justice will immediately surge federal law enforcement to the city of Chicago … to help drive down violent crime.”

Mr Trump has already sent troops to Portland, Oregon claiming that the city is “out of control.” The west coast city has witnessed almost 60 consecutive days of protests since the killing of African-American man George Floyd in Minneapolis in May.

Footage has emerged of masked troops in camouflage gear patrolling the streets in unmarked vehicles and arresting protesters. One man – a 53 year-old Navy veteran – was attacked and had his hand broken by law enforcement officers on Saturday after approaching them. The agents appear to be members of the Department of Homeland Security and the Customs and Border Protection agencies.

The Democratically-controlled city has reacted strongly against the move, with Portland’s mayor accusing the Trump administration of “sharply escalating the situation.” But earlier this week, Mr Trumps said that the federal agents had done “a fantastic job.”

Mr Trump is now risking the ire of Chicago’s mayor Lori Lightfoot, who asked the president not to send federal troops to the city at a press conference on Tuesday. Chicago has seen a sharp rise in crime in recent weeks. 15 people were shot in the city on Tuesday night.

However, Ms Lightfoot later said the US attorney’s office will supervise the additional agents joining existing federal law enforcement offices. “If those agents are here to actually work in partnership on support of gun violence and violent cases, plugging into existing infrastructure of federal agents, not trying to play police in our streets, then that’s something different,” she said.

In New Mexico, Democratic elected officials had cautioned Mr Trump against sending in federal agents, with US Senator Martin Heinrich calling on Bernalillo County Sheriff Manny Gonzales to resign for attending the White House event. “Instead of collaborating with the Albuquerque Police Department, the sheriff is inviting the president’s stormtroopers into Albuquerque,” Mr Heinrich said in a statement.

Speaking at the event in the East Room of the White House on Wednesday, which was also attended by attorney general William Barr and FBI chief Christopher Wray, Mr Trump declared that “help is on the way” for the people of Chicago. “Chicagoans should be able to live in safety, dignity and peace,” he said, adding that Americans “must hold their city leaders accountable.”

The plan Mr Trump announced on Wednesday expands an existing programme that sent hundreds of federal agents to Kansas City, Missouri, after a four-year-old boy’s shooting death to help quell a record rise in violence.

Mr Trumps also said that Minneapolis and Philadelphia had seen a sharp rise in crime.

Members of the public who had lost family members to crime also spoke at the event.

Criminal justice experts seeking answers have pointed to the unprecedented moment: a pandemic that has killed over 140,000 Americans, historic unemployment, a mass reckoning over race and police brutality, intense stress and even the weather. Compared with other years, crime in 2020 is down overall.

The decision to send federal troops – reminiscent of Mr Trump’s controversial move to deploy armed federal troops to Washington during the height of the George Floyd protests last month – is rooted in an executive order signed by the president at the end of June, which allows him to send federal officers to cities without the permission of local states in order to protect federal property and statues.

While technically presidents have had the power to deploy back-up agents across the country, this has only been done in recent times at the request of local leaders. House Speaker Nancy Pelosi accused Mr Trump of using Americans as “props.” “We live in a democracy, not a banana republic,” she said, criticising his decision to send federal troops onto the streets.

Acting homeland security secretary Chad Wolf drew a distinction between the mission in Portland — to protect federal property — and the surges in Kansas City, Chicago and Albuquerque to help stop violence. In Kansas City, the top federal prosecutor said any agents involved in an operation to reduce violent crime in the area will be clearly identifiable when making arrests, unlike what has been seen in Portland. “These agents won’t be patrolling the streets,” US attorney Timothy Garrison said. “They won’t replace or usurp the authority of local officers.”–Additional reporting PA