America Letter: Congressman is 20th Republican to announce they will not run in 2020 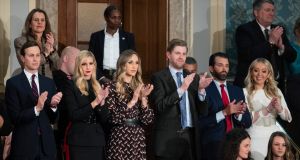 From left, Jared Kushner, Ivanka Trump, Lara Trump, Eric Trump, Donald Trump jnr and Tiffany Trump attend the state of the union address in Washington. In some Republican circles, the notion of President Trump’s children running for political office is not only a parlour game – it’s a matter of finding the right opportunity for the right Trump. Photograph: Sarah Silbiger/the New York Times

When US voters go to the polls next November for the presidential election, they will also decide who takes control of Congress. All 435 seats in the House of Representatives and 35 of the 100 Senate seats will also be contested.

Earlier this month, New York congressman Peter King became the latest Republican to announce he will not seek re-election. King has been a strong supporter of Ireland during his three decades in Congress, although his support for the IRA in his early years was highly controversial.

His departure will be a loss to Ireland in Washington, given his championing of Irish causes and his co-chairmanship of the Friends of Ireland caucus on Capitol Hill. It follows the departure of congressman Joe Crowley last year, a strong Irish-American voice on the Hill.

The president’s eldest son is a vocal presence on social media and the campaign trail, famous for his rabble-rousing attacks on liberals and the media. His new book, Triggered: How the Left Thrives on Hate and Wants to Silence Us, hit number one on the New York Times bestseller list this month

Crowley, who was honoured by the Belfast charity Flax Trust at a reception this week in Washington, lost his Queens, New York, seat to Alexandria Ocasio-Cortez at the primary stage last year.

The exit of these two Irish-American stalwarts from Congress is a telling sign of the demographic challenges facing Irish-America, though younger members such as Brendan Boyle and Conor Lamb will continue to fly the flag for Irish interests on Capitol Hill.

King’s departure has also opened up intriguing questions about his potential successor. Speculation is rife about a candidate from one of America’s best-known families: the Trumps. Among the names being floated to succeed King are Donald Trump jnr and the president’s daughter-in-law, Lara Trump.

However, on closer inspection, the Times’s bestseller list included a specific symbol to indicate that the sales were influenced by bulk purchases. It subsequently emerged that the Republican National Committee spent almost $100,000 (€91,000) on buying the book.

As well as his national profile, the 41-year-old New Yorker has experience campaigning for candidates in King’s Long Island district. Last week he held a fundraiser (where he also sold copies of his book) for Republican Lee Zeldin.

Focus has also turned to Lara Trump, who is married to the president’s other son Eric. Lara Trump, who recently gave birth to the couple’s second child, is heavily involved with her father-in-law’s political career and regularly appears on stage with the president at rallies.

A recent poll showed Ms Trump winning King’s seat by more than 30 points in a hypothetical primary contest. Though conducted by a conservative group, Club for Growth, the poll has nonetheless sparked discussion about a possible Lara Trump candidacy.

She did not shoot down the idea. “While I would never close the door on anything in the future, right now I am focused on winning a second term for President Trump,” Lara Trump said in a statement.

Nonetheless, whoever runs for King’s Long Island seat next year will face a challenging race.

Though King, who is 75, said he was stepping down to spend more time with his family, it is undeniable that his path to victory became less assured in recent elections. Although King, a popular politician, won elections decisively throughout his political career, in 2018 he beat his Democratic opponent by just six points.

In part, this reflects demographic changes. His district, long a conservative heartland, has become more Democratic-leaning in recent years as the area has become more diverse. There is also the Donald Trump effect. Hundreds of suburbs, like the Long Island district represented by King, swung against Republicans in 2018, paving the way for a Democrats’ takeover of the House of Representatives in the mid-term elections.

That King is the 20th Republican to announce they will not run in 2020 is an ominous sign for the party. As recent elections in Virginia, Pennsylvania and Kentucky have shown, broad swaths of America’s suburbs and urban centres are turning against Republicans at the ballot box and electing Democrats.

A year out from the elections, it seems the Republican quest to take back the House will be a tall order.