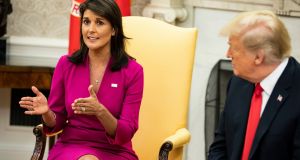 Nikki Haley (l) appears to have made the political calculation to support the president. Photograph: Samuel Corum

For most political operatives who have worked at the Trump White House, the experience has not been the career-boosting moment they hoped for.

Former press secretary Sean Spicer has just finished a stint on Dancing with the Stars having reached the quarter-final stage, his successor Anthony Scaramucci had a brief spell on Celebrity Big Brother, while Jeff Sessions is back in Alabama, running for his old Senate seat.

One former Trump administration official, however, has managed to sidestep much of the negative fallout that comes from taking a job with one of the most divisive presidents in US history.

Nikki Haley, Donald Trump’s former ambassador to the United Nations, has re-emerged into the public arena, sparking speculation about her future political aspirations. The 47-year-old former South Carolina governor has been on the speaking circuit to promote a new book.

As one Washington insider puts it, “Nikki Haley is the only person who has benefited from her time with the Trump administration.” Ironic, perhaps, given that her appointment to the Trump cabinet in the first place was something of a surprise.

Haley was a Trump sceptic in the run-up to the 2016 election, becoming embroiled in a Twitter war with the future president six months out from election day.

“The people of South Carolina are embarrassed by Nikki Haley!” Trump tweeted on March 1st, 2016, after Haley called on the president to disclose his tax returns. Haley replied with a three-word put-down: “Bless your heart.”

Haley’s life story is a compelling one. Born in Bamberg, South Carolina, in 1972 to Indian-Sikh parents, she has spoken about her experience as a daughter of immigrants. As a child, she was effectively disqualified from entering a local pageant because she didn’t fit the white or African-American category.

Her father was a doctor, her mother a teacher turned businesswoman who set up a clothing company. After working for the family business – and with a degree in accounting – Haley entered the state House of Representatives in 2004, becoming governor of South Carolina in 2010.

Haley’s politics are firmly to the right – she is anti-abortion, anti-big government and a proud convert to Christianity

Haley rose to national prominence in 2016 when, as governor, she ordered the Confederate flag – a symbol of the slavery-supporting southern states during the Civil War – to be removed from the state Capitol following the shooting dead of nine African-Americans in a church.

That experience, and her role as the first female governor of South Carolina, is the focus of the opening chapters of her new book, With All Due Respect: Defending America with Grit and Grace.

The title alludes to a memorable moment of her tenure as ambassador to the UN. When senior Trump official Larry Kudlow suggested that Haley may have been confused by suggesting Russian sanctions were imminent, she shot back: “With all due respect I don’t get confused.”

Haley also takes some shots at former colleagues. She claims that former secretary of state Rex Tillerson and chief of staff John Kelly tried to enlist her to undermine Trump but she refused. Both men have disputed her account, with Tillerson claiming that she wasn’t present for many of the meetings he attended.

She also spoke out this week in defence of the president on impeachment, arguing he has done nothing wrong. By sticking by Trump – she reportedly left the White House on good terms, and is known to be close to his daughter Ivanka and son-in-law Jared Kushner – Haley is treading a strategic path, ensuring she does not alienate the tens of millions of Trump supporters.

At the same time, she brandishes her centrist credentials. The book’s blurb talks of Haley as “a leader who seeks to bring Americans together in divisive times”, while she speaks at length of the dangers of “hyper polarisation” and the division now overshadowing American life.

Whether these vagaries will be enough to convince moderate or Democratic voters that she is a suitable presidential candidate is another matter. A true Republican, Haley’s politics are firmly to the right – she is strongly anti-abortion, anti-big government and a proud convert to Christianity.

Her fealty to Trump may leave many Democrats dubious. But with the 2024 election only five years away, Haley may be the one to watch, as Republicans begin to think about potential leaders in the post-Trump era.