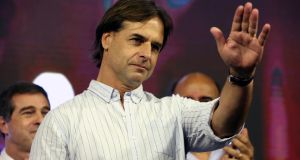 Conservative National Party challenger Luis Lacalle Pou says if he wins on Sunday he will reduce the role of the state in the economy and boost its competitiveness. Photograph: Raul Martinez/EPA

South America’s volatile political map looks set to be revised again on Sunday as voters in Uruguay are poised to eject from office the left-wing alliance that has governed the country for the last 15 years.

Final opinion polls ahead of the presidential election’s second round have Daniel Martínez, candidate of the ruling Broad Front alliance, more than 10 points behind the conservative National Party challenger Luis Lacalle Pou.

If confirmed the result would continue the continent’s political drift to the right after an era of left-wing dominance that started at the turn of the millennium. It would also bring down the curtain on one of the most successful governments in Uruguay’s history, one which won huge praise abroad for its mix of progressive social policies and sound economic management.

Even before Sunday’s vote there has been criticism within the Front of Mr Martínez’s bid to secure it a fourth successive term in office.

An alliance of multiple left-wing parties in power since 2005, it has run a largely negative campaign that analysts say has left it looking worn out after 15 years in office.

“The Front needs a miracle now. Despite its many achievements in power there has been an accumulation of problems that for public opinion are important and which voters no longer think the Front can resolve. And the opposition has done a good job highlighting these and offering an credible alternative,” says Adolfo Garcé, a political scientist at the University of the Republic in Montevideo.

In particular the government has been blamed for an explosion in the country’s homicide rate, which last year rose by 45 per cent compared to 2017. Voters in what had been by regional standards a safe country have consistently ranked public security as their top concern in the election.

Analysts have blamed last year’s spike in murders on a misguided change in the penal code which restricted the courts’ ability to hold people on remand. This deterioration in public security has taken place at a time of rising unemployment, especially among young people.

The Front’s record in education has been the subject of severe criticism during the campaign with the opposition highlighting the fact a majority of children drop out before completing secondary school.

Meanwhile the strong economic growth the Front oversaw in its first decade in office is an increasingly distant memory and the next president will have to rein in a fiscal deficit and boost stagnant foreign investment.

Scion of one of Uruguay’s most traditional political families and son of a former president, Mr Lacalle Pou says if he wins he will reduce the role of the state in the economy and boost its competitiveness.

Just 46 years old, the avid surfer would, if he wins, become the youngest person elected president since 1971, marking a break with the country’s political culture which prizes seniority.

While recent transfers of power elsewhere on the continent have in recent years been marked with political, economic and social turbulence, Uruguay is on course to maintain its reputation as South America’s best functioning democracy.

“Uruguay does not have a brilliant economy. We don’t have any Nobel prizes winners. But what we have that shines is our democracy. It is the best in Latin America and one of the best in the world. So this will be a pacific and civilised transition,” predicts Mr Garcé of the University of the Republic.