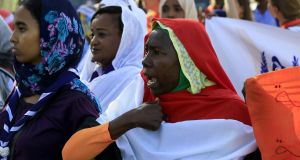 Sudanese women march in Khartoum to mark International Day for Eliminating Violence against Women, in the first such rally held in the northeast African country in decades, on November 25th, 2019. Photograph: Ashraf Shazly/AFP/Getty Images

Sudan’s transitional government has announced a plan to repeal anti-women public order laws and dissolve former dictator Omar al-Bashir’s political party, in what is being heralded as a huge step forward for the north African country.

Among many other things, public order laws stopped women from travelling alone or spending time with men they weren’t related to. In some cases, women were arrested and flogged for wearing trousers. Analysts said the laws were kept deliberately vague to increase their effectiveness as a means of control.

On Friday, Sudan’s new prime minister, Abdalla Hamdok, said the public order law “is notorious for being used as a tool of exploitation, humiliation and violation of rights, and had caused women and young people “unforgettable harm”.

Mr Hamdok said the transitional government wants to remove all “historic, social and legal obstacles” for women and youths, “who have greatly contributed to the success of this glorious revolution”.

Activists pointed out that Hamdok made this speech while surrounded by six men and no women, and that women still have little representation in politics. Only four of the government’s 18 new ministers, announced in September, were women.

Sudanese women played a huge role in the protests that ended Bashir’s rule, with some estimates saying they made up two-thirds of demonstrators. Now women are calling for more rights, but obstacles remain.

Wini Omer, a prominent Sudanese activist who has been charged twice under public order laws, said there is much more to do before the situation for women improves.

Ms Omer was charged for “indecent dressing” and “practising prostitution”, because she attended a mixed gathering with men and women. She says this was really an attack on her human rights campaigning.

Though local public order laws are being repealed now, criminal laws against women for similar offences remain, she said.

There are other laws affecting women’s rights, including one that still allows girls to be married at the age of 10, and restrictions prohibiting women from travelling or getting legal documents for children in the absence of a father, Ms Omer said. “All these restrictions make Sudanese women’s lives much difficult and required more efforts from the cabinet.”

She said women are still being arrested, harassed and exploited on the streets, particularly those who work as tea sellers and food vendors – one of the limited ways women in need can earn money.

During a 2017 trip to Sudan, one Sudanese woman told The Irish Times the state’s attitude towards women was like something from the Handmaid’s Tale, referencing Margaret Atwood’s novel which details a religious state where women are exploited, raped and used as chattels to produce children.

“In other countries, they say women first. In Sudan, we say men first,” a government employee also joked, referencing the state’s treatment of women.

Bashir was ousted in April and remains in detention. His National Congress Party was founded in 1992, and the transitional government’s new law would allow its assets to be taken over by the state.