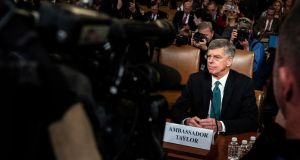 This week Washington bore witness to a rarity in US politics. The public hearings that began on Wednesday bring Donald Trump a step closer to impeachment, with a vote in the House of Representatives now likely before Christmas.

The gravity of the moment was palpable on Wednesday inside Room 1100 of the Longworth office building on Capitol Hill, where journalists, congressional staff and members of the public who had queued from the early hours watched history unfold.

The 22 members of the House intelligence committee sat in front of navy and gold drapes, peering down at the two witnesses, Bill Taylor and George Kent, who faced their inquisitors as in a courtroom.

High above in the corners of the ornate room were two alabaster eagles. Above them, the words E Pluribus Unum were carved. “Out of many, one”, the traditional motto of the United States reads. The phrase seemed particularly jarring given the deep partisan divides that began to play out on the committee room floor.

For almost six hours, Republicans and Democrats questioned the two witnesses, who claim that Trump and his associates operated an irregular foreign policy in Ukraine which undermined US interests.

Committee chairman Adam Schiff, a former lawyer, tried to lay out the impeachment case as plainly as possible. “The questions presented by this impeachment inquiry are whether President Trump sought to exploit [an] ally’s vulnerability and invite Ukraine’s interference in our elections.”

But his counterpart, Devin Nunes, immediately set out a counter-narrative – that Trump was a victim of a “scorched-earth war” by Democrats and a “carefully orchestrated media smear campaign”.

He also seized on a Trump talking point – that those critical of the president’s policy were part of a deep-state conspiracy. Shortly before the testimony began, Trump tweeted the words “Never Trumpers!”, a phrase he has coined to disparage those he says never accepted his presidency.

Nunes took his cue from the president. In his opening statement he warned of “the immense damage the politicised bureaucracy has done to Americans’ faith in government”. Executive branch employees are charged with implementing the policy of the president, he said. However, “elements of the civil service . . . have decided that they and not the president are really in charge”.

Taylor and Kent’s opening statements offered an immediate riposte, as they politely set out their impeccable public service credentials. Kent, a bow-tied state department official, said he had served under five presidents, including three Republicans, and spoke of his father’s 30-year career in the navy. Five great uncles had served in the second World War, he added, including one who survived three years in a Japanese prisoner of war camp.

Taylor, the acting ambassador in Ukraine, a West Point graduate and Vietnam veteran, told lawmakers he was a “non-partisan” who had served the country for 50 years. “I am not here to take one side or the other . . . My sole purpose is to provide facts.”

The integrity and objectivity of the witnesses seemed to only grow as the testimony continued. Taylor confirmed that his cable to Mike Pompeo in September was the first time in his career he had sent a missive raising alarm about a US policy. Under questioning, he also said that he had never before witnessed an ambassador being removed following a campaign of misinformation – a reference to Marie Yovanovitch, his predecessor, who is to testify on Friday.

Even a Republican line of questioning designed to benefit Trump – that George Kent raised concerns about perceptions of conflict of interest when former vice-president Joe Biden’s son Hunter was appointed to the board of a Ukrainian company – underscored Kent’s political independence by showing his willingness to criticise an administration, whatever its political hue.

Trump is of course not the first president facing impeachment who blamed an anonymous deep state. The Clintons, particularly at the start of Bill Clinton’s impeachment, spoke of a “vast right-wing conspiracy”. Richard Nixon was so paranoid about government officials that he installed loyalists known as the White House plumbers to stop leaks and attack perceived enemies in the system.

Targeting the civil service is a risky strategy. Ultimately it was government officials and executive branch officers that turned against Nixon and ensured he was held to account.

Times are now very different, with this impeachment inquiry taking place in a much more polarised political climate and with the added dynamic of social media, and its swamp of unregulated conspiracy theories.

The wheels of government provide an important check and balance on executive power. Whether the American public are minded to listen is another matter.