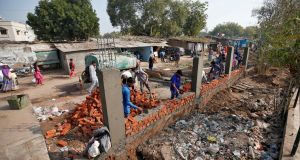 Construction workers build a wall along a route that US president Donald Trump and India’s PM Narendra Modi will be taking, in Ahmedabad, India. File photograph: Amit Dave/Reuters

A newly built wall will shield US president Donald Trump from noticing a slum when he visits Indian prime minister Narendra Modi’s hometown of Ahmedabad during his two-day India trip next week.

Officials claim the wall is part of a “beautification drive” ahead of Mr Trump’s visit to the western Indian city in Gujarat state, of which Mr Modi was chief minister for nearly 13 years before becoming prime minister in 2014.

But contractors associated with erecting the wall concede that the authorities do not want Mr Trump to see the Sarania Vass slum that houses more than 800 families on his fleeting ride into the city for a three-hour stopover next Monday.

“Poverty and slums are a reality of our life, but Modi’s government wants to hide the poor [from Mr Trump],” one local told Reuters.

Mr Trump is visiting India to reaffirm bilateral strategic, defence and commercial ties between New Delhi and Washington that have recently been undermined by trade disputes and acerbic diplomatic exchanges over the disputed Himalayan principality of Kashmir.

At Mr Modi’s behest, Mr Trump’s trip is scheduled to begin at Ahmedabad, where he will visit Mahatma Gandhi’s ashram and inaugurate the Motera cricket stadium, billed as the world’s largest for the sport, with a seating capacity of more than 110,000.

The event at the stadium is dubbed “Namaste Trump”, or “Hello Trump”, and is in reciprocation for the raucous “Howdy Modi” pageant the US president held for the Indian prime minister in Houston last September.

Announcing his trip to India, Mr Trump told reporters earlier this month that Mr Modi had informed him that 5 to 7 million people would line the 22km route from the city’s airport to the Gandhi ashram and stadium in Ahmedabad.

Ahmedabad municipal officials, however, said they expect some 200,000 people to participate in the event welcoming Mr Trump, US first lady Melania Trump and Mr Modi.

Of these, some 10,000 will sit on the ground around the stage in the stadium where Mr Trump and Mr Modi are to address their audience, in addition to 100,000 who are to be seated in the stadium three hours before Mr Trump and Mr Modi arrive. According to security protocol, they will all be allowed to leave some two hours after the US president and the Indian prime minister have departed.

Also planned for the US president’s brief Ahmedabad stop-off is an elaborate roadshow enacted atop 50 large stages lining the route from the airport, on which musicians, dance troupes and other artistes will perform as the VIP convoy passes by. Officials said this display would exhibit India’s “cultural diversity”.

Ahmedabad’s municipal officials have managed to rid Mr Trump’s proposed route of all stray dogs and cattle. They have also planted scores of fully grown palm trees in the area, as well as refurbishing roads and streets and repainting all buildings and electricity poles.

The proposed Ahmedabad spectacular has been criticised by opposition parties.

In an editorial in its weekly Saamana newspaper, the Sena, which until recently was closely aligned with Mr Modi’s Hindu nationalist Bharatiya Janata Party, likened Mr Trump’s welcome to that accorded to British monarchs visiting India before independence in 1947.

It also criticised the building of the wall to hide the Ahmedabad slum, by asking whether the US was going to offer India loans to build similar structures across the country to conceal poverty.

From Ahmedabad, Mr Trump will travel to Agra to visit the Taj Mahal, the 17th-century white marble monument to love, and then on to Delhi where he will spend a day in meetings with senior Indian officials and businessmen.

Coronavirus outbreak ‘far from over’ in Asia - WHO 08:12
Coronavirus: UK fatalities rise to 1,408 with worst thought yet to come 22:51
Covid-19: Spain now third country with more infections than China 21:43
Coronavirus: New Yorkers cheer arrival of hospital ship as cases soar 21:28
Coronavirus: Africa prepares for surge in cases and mass casualties 20:51