WHO urges all countries to take action to contain coronavirus 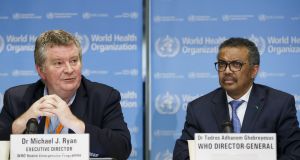 The world could miss the chance to curb the spread of the Covid-19 coronavirus because of a failure of countries to fund efforts to tackle it, the head of the World Health Organisation has warned.

The response of donor countries to a funding appeal from the WHO was “not fast enough” and, as a result, “we may lose the window of opportunity we have” to fight the disease, Dr Tedros Adhanom Ghebreyesus said on Monday.

“Because of the serious measures being taken by China, the spread of the virus to the rest of the world is slow, but this may not stay long,” Dr Tedros said. “During this window of opportunity the rest of the world should hit hard and should really prepare well and take actions with the goal of containing the virus.”

Dr Tedros, a former minister for health in Ethiopia, was speaking shortly after receiving an honorary fellowship from the Royal College of Surgeons in Ireland at a ceremony in the WHO headquarters in Geneva.

Chinese authorities say the stabilisation in the numbers is a sign that measures taken to halt the spread of the disease are having an effect.

The decline in new cases of the virus reported in recent days in China must be interpreted very cautiously, Dr Tedros said, and it was “too early” to say if this trend would continue. “Every scenario remains on the table,” he said.

Mike Ryan, head of the WHO’s emergencies programme, told a news conference in Geneva that, “The real issue is whether we are seeing efficient community transmission outside of China and, at the present time, we are not observing that.”

More than 300 American cruise liner passengers, including 14 who tested positive for the virus, were flown home to military bases in the US after two weeks under quarantine off Japan.

The cruise ship Diamond Princess, which, with more than 400 cases, has by far the largest cluster outside China, has become the biggest test so far of other countries’ ability to contain the outbreak that has killed 1,770 people in China and five elsewhere.

About half of all known cases of the virus outside China have been found aboard the Diamond Princess, which was ordered to stay under quarantine at the port of Yokohama on February 3rd.

Two Irish citizens aboard the luxury liner are expected to be evacuated this week. They are understood to be from Co Meath.

Meanwhile, Cork University Hospital said no staff were refusing to implement agreed protocols for when X-rays are performed in the isolation room of its emergency department. It was responding to claims made in social media that some staff were refusing to perform chest X-rays on people suspected of having Covid-19.

The HSE said on Monday evening there were no confirmed cases of the virus in Ireland.