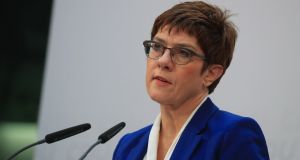 Outgoing CDU leader Annegret Kramp-Karrenbauer at a news conference at the party’s headquarters in Berlin on Monday. Photograph: Krisztian Bocsi/Bloomberg

The announcement of her departure to shell-shocked colleagues at the CDU steering committee’s regular Monday morning meeting triggered what participants described as an “emotional” debate about growing party divisions.

In October 2018 Dr Merkel decided, after a regional election defeat, to separate the roles. She announced her resignation as CDU leader after 18 years, but vowed to stay on as chancellor until the end of her fourth term at the end of 2021.

Party sources said this generated confusion over the division of power within the party. Having Dr Merkel still around did little to help the new CDU leader put her stamp of authority on the party.

With Dr Merkel’s backing, Mrs Kramp-Karrenbauer, a conservative Catholic from the southwestern state of Saarbrücken, won the CDU leadership in December 2018.

But her narrow victory, followed by a series of gaffes and state election disasters, saw her confronted with vocal critics at last December’s party conference. She challenged them to put up or shut up, knowing such resignation threats can be made only once.

Her popularity continued to slide and a weekend poll for the Bild am Sonntag newspaper showed just 15 per cent of Germans thought she was the right person to be the next chancellor; 72 per cent thought she would be a bad choice.

The latest poll disaster came days after regional CDU figures, in the eastern state of Thuringia, defied Mrs Kramp-Karrenbauer to back as state premier a candidate who also attracted the support of the far-right Alternative für Deutschland.

Mrs Kramp-Karrenbauer’s protestations against her regional colleagues only highlighted her political impotence. It has also emboldened a wing of the CDU that wants a stronger conservative profile and, if necessary, strategic co-operations with the far right.

Those demands have alarmed other CDU leaders who believe the party’s strength lies in maintaining the political centrist path established under Dr Merkel.

Senior CDU man Wolfgang Schäuble reportedly told Monday’s closed-door party meeting: “If we carry on like this, none of us will be chancellor.”

Potential successors to Mrs Kramp-Karrenbauer include Friedrich Merz, a conservative who lost out narrowly in 2018, and Jens Spahn, the 39-year-old federal health minister who finished third in the 2018 leadership race.

Other hopefuls include Armin Laschet, state premier of North-Rhine Westphalia and its influential CDU branch, and Markus Söder, leader of the CDU’s Bavarian sister party, the Christian Social Union.