‘It was all bullsh*t.’ Trump rails against opponents in caustic speech

US president Donald Trump celebrates his acquittal on impeachment charges with an event at the White House. Video: Reuters 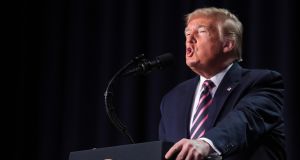 US president Donald Trump lashed out at Democrats and his political enemies at a White House gathering on Thursday, a day after he was acquitted in his impeachment trial.

Declaring that the lunchtime event was “not a news conference ... not a speech”, but a “celebration”, Mr Trump delivered an hour-long monologue in the East Room of the White House, surrounded by Republican senators, cabinet members and the legal team that represented him in the impeachment trial.

“We went through hell, unfairly,” he said, as he thanked those in the room for their support. “I’ve done nothing wrong.”

Describing the investigation into Russian interference in the 2016 election, which dominated the first two years of his presidency as “all bullsh*t”, he said Democrats had “wanted to inflict pain on a person who had just won an election”.

He said the “witch hunt” against him started “from the day we came down the elevator”, a reference to his announcement of a presidential run in Trump Tower in 2015. “Evil, corrupt, dirty cops, leakers and liars,” he said, as he described efforts to investigate him over links with Russia, adding: “this should never happen to another president”.

“This guy is great, and I appreciate it” he said as he pointed to the Kentucky Republican, noting that Mr McConnell had ensured the confirmation of 191 conservative judges by the Senate who had first been proposed by the White House. “Mitch McConnell, I want to tell you, you did a fantastic job,” he said. “He understood that this was crooked politics.”

Mr Trump also denounced House of Representatives speaker Nancy Pelosi and House intelligence committee chairman Adam Schiff, the Californian congressman who led the Democrats’ case against him in the impeachment trial. “They’re vicious and mean,” he said. “These people are vicious. Adam Schiff is a vicious, horrible person. Nancy Pelosi is a horrible person.”

Mr Trump became only the third president in US history to be impeached in December, when he was charged with two articles of impeachment over his dealings with Ukraine. But on Wednesday, the Senate found him not guilty on both charges, with only one Republican – Mitt Romney of Utah – voting to convict him on one of the charges.

Earlier in the day, Mr Trump took a swipe at Mr Romney, a former Republican presidential nominee, at the annual National Prayer Breakfast in Washington. “I don’t like people who use their faith as justification for doing what they know is wrong,” Mr Trump said.

Mr Romney, a Mormon, had cited his religious faith as one of the reasons he voted with Democrats to find the president guilty of abusing his power in Wednesday’s vote.

Asked about Mr Trump’s comments later, the House speaker said: “I don’t know if the president understands about prayer,” but she reiterated that she “prays hard for him”. “He really needs our prayers,” she added.

Mr Trump brandished copies of the front pages of USA Today and the Washington Post, which both led with headlines announcing the president’s acquittal.

Mr Trump’s White House speech ended with the president and his family leaving the East Room to strains of “God Bless America”, and enthusiastic applause from those present.