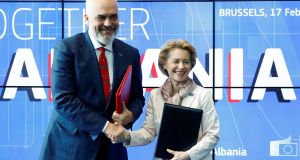 Deputies in North Macedonia have dissolved parliament after confirming that early elections will take place on April 12th, amid growing expectations that the ex-Yugoslav republic and neighbouring Albania will soon receive approval to launch long-awaited European Union accession talks.

North Macedonia’s government announced its resignation last October after France, with support from Denmark and the Netherlands, blocked the start of membership negotiations for the two Balkan states, in what senior EU officials called a “historic mistake” at a time of rising geopolitical competition in the region.

Critics of the Paris-led veto warned that China, Russia and Turkey could capitalise on EU passivity in the Balkans, and noted that the setback for North Macedonia’s government could boost nationalists in the snap parliamentary vote.

French president Emmanuel Macron called for an overhaul of the EU’s enlargement process, to make it more responsive to the concerns of member states and to how candidate countries conduct reforms, and he said this weekend that proposed changes look promising.

“We are all awaiting a report from the European Commission in March on the two countries,” Mr Macron said at a security conference in Munich.

“We have to see what the commission is going to say about the state of the expected progress . . . if the results are positive and confidence is established, we then should be able to open negotiations.”

As Balkan leaders gathered in Brussels for talks on Sunday and Monday with senior EU officials, European Commission president Ursula von der Leyen said it was “in our common geostrategic interest” for the region to be “as close as possible to the European Union”.

“We have revised our [enlargement] methodology and . . . in its revised form [it] should create and regain trust in all sides in this process because it’s accelerating the structural reforms,” she added.

“On the other hand it’s creating a credible perspective for the western Balkans to join, over time, the EU. We want also to pave the way for Albania and North Macedonia to start the accession talks with EU if possible before the Zagreb summit,” she said, referring to a meeting in the Croatian capital in May.

A green light from the EU in March could boost the prospects of North Macedonia’s former prime minister Zoran Zaev and his Social Democrats in their April election battle with the nationalist VMRO-DPMNE party.

Despite fierce opposition from the nationalists, Mr Zaev agreed last year to change his country’s name from “Macedonia” to end a decades-old dispute with neighbouring Greece and to revive its EU prospects and remove an irritant in Balkan relations.

Before parliament in Skopje was dissolved on Sunday night, deputies passed an EU-backed law on reform of its prosecution service and measures to align its military with Nato, which North Macedonia is now in the process of joining.