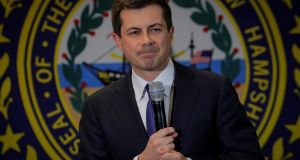 Pete Buttigieg continues to lead the Democratic party’s delayed Iowa caucuses in a major boost for the 38-year-old Indiana mayor, as the primary season began in a cloud of chaos and uncertainty.

With 75 per cent of precincts reported in Iowa as of Wednesday evening, Mr Buttigieg led Vermont senator Bernie Sanders by 1.7 percentage points.

Mr Buttigieg secured 26.9 per cent of delegates, while Mr Sanders was a close second at 25.2 per cent. Elizabeth Warren was in third place with 18.2 per cent, while Joe Biden secured 15.6 per cent of delegates, an undoubtedly disappointing performance for the former vice-president, despite efforts by his campaign to play down expectations in the early-voting state.

Nonetheless, while the latest set of results showed Mr Buttigieg in the lead, the race was still too close to call on Wednesday night.

The Iowa caucuses – traditionally the starting point for the months-long process of choosing a presidential candidate – has been mired in confusion after the results were delayed due to “inconsistencies” in the reporting of the outcome.

Voting took place at almost 1,700 sites across the mid-western state on Monday night in the first selection process of the Democratic primaries. But the Iowa Democratic Party was forced to delay the results over “quality control” issues.

Official results began to be announced on Tuesday evening, almost 24 hours after the caucuses began and most candidates had left the state to begin campaigning in New Hampshire. Further results were released on Wednesday.

Mr Buttigieg is the political newcomer in the race, but has made a formidable impression since announcing his bid last April, particularly in early-voting states like Iowa and New Hampshire where he invested significant resources.

The Harvard- and Oxford-educated mayor served in Afghanistan and is also a committed Christian – attributes that could play well with Republicans in swing states. But he lacks the big-name recognition of his rivals, which could be a hindrance in states that select their candidate later in the cycle. If elected, he would be the first gay person to hold the office of president.

Mr Buttigieg, as well as several of the top-polling candidates for the Democratic nomination, spent much of the day campaigning in New Hampshire, which will hold its primary next Tuesday.

Campaigning in the east of the state, Mr Biden conceded that he had taken a “gut punch” in Iowa but added that “this isn’t the first time in my life I’ve been knocked down”. While he said he had great respect for Mr Buttigieg, he warned of the “risk” in voting for a candidate whose only political experience is as mayor of a city of 100,000 people.

Mr Biden looked set to come in fourth place in the Iowa caucuses and faces a tough battle in New Hampshire, according to polling. An Emerson poll on Tuesday showed Mr Sanders, who hails from neighbouring Vermont, ahead in New Hampshire, with Mr Buttigieg ranking second, though the poll sample was small.

As calls continued for the Democratic National Committee to reconsider Iowa’s frontrunner status in the process for choosing a presidential candidate, party chairman Tom Perez said that what happened in Iowa “should never happen again”.

“It is clear that the app in question did not function adequately,” he said.

“It will not be used in Nevada or anywhere else during the primary election process. The technology vendor must provide absolute transparent accounting of what went wrong.”

The app designed to help local party officials to transmit results to Democratic headquarters in Des Moines was at the centre of Monday night’s crisis, as they struggled to send in their votes.

The app was developed by a company called Shadow, which was founded by former officials from Hillary Clinton’s campaign. Precinct leaders also reported delays when they tried to phone in results after abandoning the app, with many on hold for hours.