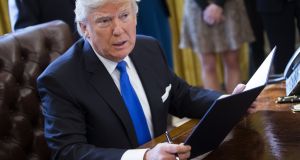 US president Donald Trump has signed executive orders to allow construction of the Dakota Access and Keystone XL oil pipelines, a move certain to anger environmentalists and Native Americans.

Both pipe projects had been blocked by Barack Obama’s administration, partly because of environmental concerns.

But Mr Trump has questioned the science of climate change and campaigned on a promise to expand energy infrastructure instead.

Mr Trump signed an order reviving the Keystone project, which would span nearly 1,200 miles across six US states, shifting more than 800,000 barrels of petroleum daily from Canadian oil sands through Nebraska to refineries in the Gulf Coast.

“Something that’s been in dispute and it’s subject to renegotiation of terms by us,” the president said, when signing the order. “We’re going to renegotiate some of the terms and, if they’d like, we’ll see if we can get that pipeline built.”

It will create 28,000 jobs, he added, while showing the order to photographers: “Great construction jobs.”

Studies have suggested that most of the jobs would not be permanent, however.

Then Mr Trump signed the executive order for the Dakota Access pipeline, a $3.7bn project that would transport crude oil from North Dakota through South Dakota and Iowa to a shipping point in Illinois, “again, subject to terms and conditions to be negotiated by us”.

Mr Trump signed a further order to streamline the “horrible permitting process” and slash regulations. “The regulatory process in this country has become a tangled up mess and very unfair to people. That’s a big one.”

The president signed the orders with vice-president Mike Pence, chief of staff Reince Priebus, chief strategist Steve Bannon and adviser Kellyanne Conway. among those standing nearby.

The Standing Rock Sioux tribe, whose reservation is adjacent to the proposed Dakota pipeline, staged protests that drew thousands of climate change activists to the rural area of Cannon Ball, North Dakota. Most of the pipeline was complete by last summer except for a small section under Lake Oahe, a reservoir that forms part of the river.

The Sioux won a significant victory late last year when the Army Corps of Engineers declined to allow construction of the pipeline under the lake , saying alternative routes needed to be considered.

The Sioux and their supporters say the project threatens drinking water and Native American sites, although Energy Transfer Partners, the company that wants to build the pipeline, disputes that and insists that the pipeline will be safe.

Mr Obama cancelled the Keystone project in late 2015 after environmentalists campaigned against the project for more than seven years. “America is now a global leader when it comes to taking serious action to fight climate change, and frankly, approving this project would have undercut that leadership,” he said at the time.

Mr Trump’s move provoked an immediate backlash. Bernie Sanders, Democratic senator for Vermont, said: “Millions of people came together all over this country to stop the Keystone XL and Dakota Access pipelines and say we must transform our energy system away from fossil fuels to renewable energy. On Tuesday, President Trump ignored the voices of millions and put the short-term profits of the fossil fuel industry ahead of the future of our planet.

“At a time when the scientific community is virtually unanimous in telling us that climate change is real, it is caused by human activity and it is already causing devastating problems, we cannot afford to build new oil pipelines that lock us into burning fossil fuels for years to come. I will do everything I can to stop these pipelines and protect our planet for future generations.”

House speaker Paul Ryan endorsed Mr Trump’s decision to advance the pipeline projects. “It’s about time,” he said. “The unfortunate reality is that these important infrastructure projects were used by special interests to advance their radical anti-energy agenda and were therefore needlessly halted by the last administration - to the detriment of America’s national interest. These pipelines will strengthen our nation’s energy supply and help keep energy costs low for American families.”

But environmentalists expressed disappointment and vowed to fight on. Erich Pica, president of Friends of the Earth, said: “Donald Trump has made it clear that his America does not include the millions of Americans who fought to protect our land, water, sacred cultural sites and climate from dangerous pipelines.

Mr Trump has emphatically pledged his allegiance to the oil companies and Wall Street banks that stand to profit from the destruction of public health and the environment.”The movement to defend indigenous rights and keep fossil fuels in the ground is stronger than oil companies’ bottom line. Friends of the Earth and our allies will not give up the fight to stop Trump’s agenda and these destructive pipelines.”

While sitting in the Oval Office on Tuesday, the new president also said he would announce his supreme court nominee next week.

Asked by reporters when he will seek to fill the supreme court vacancy, Mr Trump said: “I’ll be announcing it some time next week.” Democrats are gearing up for a potential battle over the nomination.