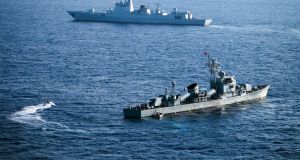 Chinese warships taking part in a drill in the South China Sea earlier this year. China has angered its neighbours by its aggressive claims to the maritime region, through which €4.75 trillion in trade is shipped every year. Photograph: Getty Images

Tensions over the South China Sea could be set to escalate after Beijing urged the US to act “cautiously” in its approach to disputed islands which China claims as its “irrefutable” sovereign territory.

In recent years, China has angered its neighbours, including Malaysia, Brunei, the Philippines, Vietnam and self-ruled Taiwan, by its aggressive claims to territories in the maritime region, through which €4.75 trillion in trade is shipped every year.

“No matter what changes happen in other countries, what they say or what they want to do, China’s resolve to protect its sovereignty and maritime rights in the South China Sea will not change,” Ms Hua continued.

“It’s a question of if those islands are in fact in international waters and not part of China proper, then yeah, we’re going to make sure that we defend international territories from being taken over by one country,” he said.

While Ms Hua’s comments are in line with established Chinese policy on the strategic waterway, they are also a reminder of Beijing’s growing tetchiness with Donald Trump. China has already been angered by Washington’s growing closeness with Taiwan, which it considers one of its provinces, to be taken back by force if necessary.

Mr Trump’s nominee as secretary of state, Rex Tillerson, had suggested during his confirmation hearing that China would “not be allowed” to access the territories in the South China Sea, prompting angry calls in the state-controlled media for Beijing to go to war over the island, but a more measured official response.

An international tribunal in The Hague has rejected Beijing’s claims as without foundation after an application from the Philippines, although Philippine president Rodrigo Duterte has signalled a willingness to negotiate with China and distanced himself from the US, a long-time ally.

Mr Spicer’s comments, and those of Mr Tillerson, suggest that the US might be ready to intervene militarily in the region, which would almost certainly lead to confrontation with China, a rising military power in the region.

An editorial in the China Daily newspaper said: “If there is to be “war” in the South China Sea it will be because of actions by the US military.”

Separately, China reacted positively to Mr Trump’s withdrawal from the Trans-Pacific Partnership (TPP), in which it wasn’t included and which it saw as a strategy to curtail China’s growing influence in the region.

While the US becomes more protectionist and inward-looking, China’s president Xi Jinping has emerged as a champion of globalisation and last week spoke of at the World Economic Forum in Davos of how global trade and reduced trade barriers had benefited the world’s second largest economy.