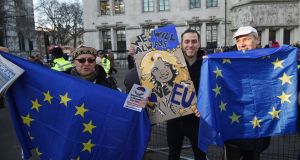 Labour will not “frustrate” the process for invoking article 50, Jeremy Corbyn said after the Supreme Court ruled that parliament must give permission to start the formal mechanism for Brexit.

But the Labour leader said his party would seek to amend the legislation in order to prevent Theresa May allowing the UK to become a “bargain-basement tax haven”.

The SNP has vowed to table 50 amendments to any legislation, while the Liberal Democrats have said they will oppose the triggering of article 50 unless there is a second referendum on the final deal.

Mr Corbyn said his party wanted the final deal to be put to a “meaningful vote” in parliament instead of a plan which would see the proposed deal presented with no option for renegotiation.

He said: “The government has today been forced by the Supreme Court to accept the sovereignty of parliament.

“Labour respects the result of the referendum and the will of the British people and will not frustrate the process for invoking article 50.

“However, Labour will seek to amend the article 50 Bill to prevent the Conservatives using Brexit to turn Britain into a bargain-basement tax haven off the coast of Europe.

“Labour is demanding a plan from the government to ensure it is accountable to parliament throughout the negotiations and a meaningful vote to ensure the final deal is given parliamentary approval.”

The SNP, the third largest party in the Commons, will put forward dozens of “serious and substantive” amendments to the legislation.

Former Scottish first minister Alex Salmond, the SNP’s international affairs spokesman, said: “We welcome the Supreme Court’s decision and hope that their ruling brings this Tory government back to the reality that they cannot simply bypass elected parliamentarians to fulfil their role in carrying out due and proper scrutiny of one of the biggest decisions facing the UK.”

He said the SNP’s amendments would ensure that the devolved administrations are treated as “equal partners”.

“If Theresa May is intent on being true to her word that Scotland and the other devolved administrations are equal partners in this process, then now is the time to show it.

Liberal Democrats leader Tim Farron said: “This Tory Brexit government are keen to laud the democratic process when it suits them, but will not give the people a voice over the final deal. They seem happy to start with democracy and end in a stitch-up.

“The Liberal Democrats are clear – we demand a vote of the people on the final deal and without that we will not vote for article 50.”

Green Party co-leader Caroline Lucas confirmed she would vote against triggering article 50 on the timetable set out by the prime minister.

Ms May has vowed to trigger article 50, starting the formal two-year countdown to Brexit, by the end of March.

Supreme Court has spoken. Now Parliament must deliver will of the people – we will trigger A50 by end of March. Forward we go!

Ms Lucas said: “The spotlight now falls on MPs – and in particular the Labour Party – to properly scrutinise the government’s plans and act accordingly.”

“All the lawyers in London are not going to be able to stop us leaving the European Union, ” he told Sky News.

Ukip leader Paul Nuttall said: “This decision is hardly a surprise but in the end it will make no real difference.

“The will of the people will be heard, and woe betide those politicians or parties that attempt to block, delay, or in any other way subvert that will.”

Pro-Brexit Labour MP Kate Hoey, of the Labour Leave campaign, said the party risks losing the upcoming parliamentary byelections in Copeland and Stoke-on-Trent Central if it seeks to block article 50.

“If Labour MP’s are seen to be frustrating the will of the people by opposing article 50 then they will lose their seats,” warned Ms Hoey.

Prominent Brexiteer and Conservative MP Dominic Raab, a supporter of the Change Britain campaign, said: “The government was right to appeal, and the Supreme Court has usefully made clear that a short Bill authorising the start of negotiations is all that is needed.

“Let’s have an end to the wrecking tactics.

“Every democrat in parliament should now support this legislation, so we can get on and deliver on the will of the British people, and secure the best possible deal for the whole country.”

Foreign secretary Boris Johnson said in a tweet: “Supreme Court has spoken. Now parliament must deliver will of the people – we will trigger A50 by end of March. Forward we go!”

Lord Newby, leader of the Liberal Democrats in the House of Lords, said it was not the role of peers to vote down the Bill.

He told Sky News: “I don’t think the House of Lords is going to seek to stop this Bill from being enacted within the due time and the Government will then start its negotiations.”

A Welsh Government spokesman said: “We welcome the Supreme Court judgment today which means that the UK government must seek parliamentary approval in the form of a Bill before it can trigger article 50 to leave the European Union.

Tory former Cabinet minister Iain Duncan Smith said the ruling was made by a “self-appointed court”.

He told BBC Two’s Victoria Derbyshire show: “You’ve got to understand that, of course, there’s the European issue but there’s also the issue about who is supreme – parliament or a self-appointed court.

“This is the issue here right now, so I was intrigued that it was a split judgment, I’m disappointed they’ve decided to tell parliament how to run its business.

“After all, there was a vote before in December overwhelmingly to trigger article 50, so they’ve stepped into new territory where they’ve actually told parliament not just that they should do something, but actually what they should do, and I think that leads further down the road to real constitutional issues about who is supreme in this role.”

Sinn Féin’s leader in Northern Ireland Michelle O’Neill said the court ruling ignored the will of the people in the North.

“The failure to recognise the will of the people of the North is a failure by the Tory government, continually refusing to acknowledge the will of what the people here have asked for.

“Brexit will absolutely undermine the Good Friday Agreement and the principle of consent.”

The party says it will not take its seats at Westminster when a vote on Brexit takes place, the party has said.

The party’s finance spokesman Pearse Doherty said the people who voted for them were aware of their position.

Mr Doherty said this would come as no surprise to their supporters.

He said: “It is not going to make a difference. It will not come down to four votes.”