By a verdict of eight to three the UK supreme court has ruled that the British government needs parliamentary approval to trigger Article 50 and initiate Brexit. Video: Reuters 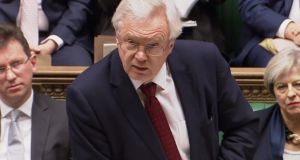 British secretary of state for exiting the European Union, David Davis, makes a statement to the House of Commons on the government’s Brexit plans. Photograph: AFP/Handout

Brexit legislation will be introduced “within days” to ensure that the government can stick to its timetable of triggering the process of leaving the European Union by the end of March, Brexit secretary David Davis has told MPs.

“We will within days introduce legislation to give the government the legal power to trigger article 50,” Mr Davis told UK parliament.

“This will be the most straightforward Bill possible to give effect to the decision of the people and respect the Supreme Court’s judgment.”

Britain’s supreme court ruled on Tuesday that parliament must approve the UK’s departure from the European Union.

By a majority of eight to three, judges ruled that prime minister Theresa May cannot lawfully bypass MPs and peers by using the royal prerogative to trigger article 50 of the Lisbon Treaty and start the two-year process of negotiating the UK’s divorce from its EU partners.

British attorney general Jeremy Wright said the government was “disappointed” with the verdict.

“But we have the good fortune to live in a country where everyone has to obey the law. So of course the government will comply,” he said.

“The court has been very clear throughout this case that it has not been deciding whether the United Kingdom should or should not leave the European Union.

“The people of the United Kingdom have already made that decision . . . Now enacting that decision will be a political matter and not a legal matter.”

Mr Davis has categorically ruled out the prospect of a second EU referendum as he said he would not back another poll “under any circumstances”.

The prime minister’s office reacted to the ruling, saying the government would still deliver on the Brexit referendum result, “triggering article 50, as planned, by the end of March. Today’s ruling does nothing to change that.”

“It’s important to remember that parliament backed the referendum by a margin of six to one and has already indicated its support for getting on with the process of exit to the timetable we have set out,” it said.

“We respect the supreme court’s decision, and will set out our next steps to parliament shortly.”

The ruling is a blow to Ms May, who has repeatedly said she intends to trigger article 50 by the end of March following the clear majority in favour of Brexit in the June 2016 referendum.

It was won by a wide-ranging group of anti-article 50 campaigners led by investment manager Gina Miller and Londoner Deir Dos Santos.

A spokesman for Labour leader Jeremy Corbyn said: “Labour respects the result of the referendum and the will of the British people and will not frustrate the process for invoking article 50.

“However, Labour will seek to amend the article 50 Bill to prevent the Conservatives using Brexit to turn Britain into a bargain basement tax haven off the coast of Europe.”

Mr Corbyn’s spokesman said his party would “seek to build in the principles of full, tariff-free access to the single market and maintenance of workers’ rights and social and environmental protections.”

“Labour is demanding a plan from the government to ensure it is accountable to parliament throughout the negotiations and a meaningful vote to ensure the final deal is given parliamentary approval,” he said.

In Tuesday’s decision, the judges also ruled the British government does not have to consult any of the devolved administrations, including Northern Ireland, before triggering article 50.

The judge said the Sewell Convention, which says that normally Scotland has to give legislative consent to any legislation at Westminster affecting devolved matters, is a convention (ie, not law) and not within the jurisdiction of the court

Nicola Sturgeon, the Scottish first minister, is planning to stage a Holyrood vote on article 50 even though the second part of the ruling means the UK government is not legally required to seek Scottish consent.

Ms Sturgeon had anticipated the court would reject the Scottish, Welsh and Northern Irish government’s claims that the “legislative consent” of all three parliaments was needed before triggering article 50.

But she will use the Holyrood vote to challenge opposition parties to support her demands that Scotland is given special access to the single market, even though that has been ruled out by Ms May and other cabinet ministers.

Ms Sturgeon used her new column in the Record newspaper on Monday to warn:

“No matter what the supreme court decides, I want to make this crystal clear: I intend to make sure the Scottish parliament has the chance to vote on triggering article 50.

“And if the UK government doesn’t start showing Scotland some respect, I’ll make sure that people across Scotland have the chance to choose their own future, before the Tories drag us off an economic cliff edge.”