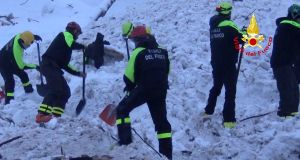 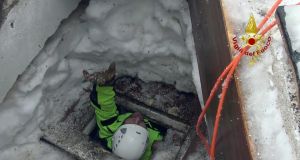 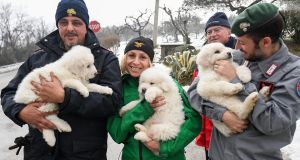 Rescuers hold three puppies that were found alive in the rubble of the avalanche-hit Hotel Rigopiano. Photograph: Alessandro Di Meo/AP/ANSA 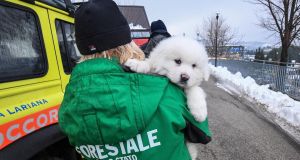 An Italian Forestry Corp officer officer holds one of three puppies that were found alive in the rubble of the avalanche-hit Hotel Rigopiano. Photograph: EPA/Italian Fire Department 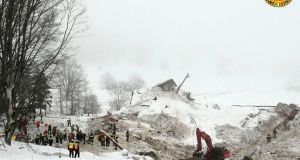 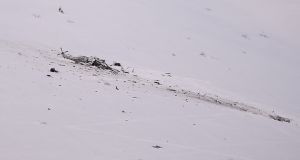 The wreck of a helicopter following a crash in the mountains on Tuesday near the ski resort of Campo Felice, central Italy. Six people onboard were killed. Photograph: Filippo Monteforte/AFP/Getty Images

The death toll from an avalanche which left a mountain resort in central Italy buried under tonnes of snow and rubble has climbed to 17, as hopes of finding 12 missing people still alive fade.

Firefighters located half a dozen bodies in the Hotel Rigopiano within a few hours earlier on Tuesday, doubling the death toll six days after the disaster.

Rescue crews at the Hotel Rigopiano in Abruzzo have also had to deal with fresh tragedy after a helicopter crashed in the same region on Tuesday, killing all six people on board.

Rescue crews had been buoyed by the discovery of three of the hotel’s resident puppies, though they stressed that the sheepdogs were found in a boiler room far from where the missing people are thought to be.

Firefighters’ spokesman Alberto Maiolo said search crews aided by heavy digging equipment were finally able to penetrate the snow-covered central part of the hotel for the first time — the bar and kitchen area — and found the bodies. He said there were no other signs of life.

“Logically, hopes fade as time passes, but we are continuing to search and trying to do it as quickly as possible,” he said.

The first funerals have been held, with crowds gathering outside the hilltop church in Farindola to pay their respects to Alessandro Giancaterino.

The chief waiter, one of the first victims to be pulled from the rubble, had offered to stay for a double shift on January 18th to spare a colleague from having to make his way to the hotel through the snow, which was 6-9ft high in some places.

“He was a great hard worker. He was very professional,” said his brother, Massimiliano Giancaterino.

“This is the memory that I want to keep of my brother, beyond obviously the private ones that I keep in my heart.”

Prosecutors are investigating whether a series of missed communications, underestimations of risks and delays in responding to days of heavy snowfall contributed to the death toll from the January 18th avalanche.

In addition, they are looking into the original construction of the isolated resort and whether it should have been open for business at all in such conditions.

Mr Giancaterino, who is also the former mayor of Farindola, said it was useless to speculate now about whether the tragedy could have been avoided while an investigation was just beginning.

“Now it is not the time for hypothesis,” he said.

“It is the time of pain and above all my thoughts go to the friends and relatives of those who are still missing.”

Nine people were pulled out alive from the rubble, three of whom remain in hospital in nearby Pescara.