Trump walks out of meeting with Democrats over wall funding

In a 10-minute address to his fellow Americans US President Donald Trump warned that the United States faces a security and humanitarian crisis on its southern border, but stopped short of declaring a national emergency. Video: The White House 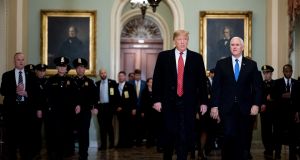 An attempt at resolving the deepening impasse over the partial government shutdown in the US ended in disarray on Wednesday after president Donald Trump walked out of a meeting with congressional leaders in the White House.

Mr Trump, who had said on Tuesday night that the shutdown could be solved by a 45-minute meeting, invited the Democratic and Republican leaders in Congress for a summit in the Situation Room on Wednesday afternoon. But the president walked out of the meeting after House speaker and leading Democrat Nancy Pelosi said she would not sanction funding for his proposed wall along the southern US border.

“Just left a meeting with Chuck [Schumer] and Nancy, a total waste of time,” the president tweeted shortly after the meeting broke up. “I asked what is going to happen in 30 days if I quickly open things up, are you going to approve Border Security which includes a Wall or Steel Barrier? Nancy said, NO. I said bye-bye, nothing else works!”

The refusal of Democrats to sanction funds for the anti-migrant wall as part of any new funding measures for the government has led to the partial shutdown, which is affecting 800,00 federal workers.

Speaking to reporters outside the White House, Senate minority leader Chuck Schumer confirmed that Mr Trump had walked out. “Again we saw a temper tantrum because he couldn’t get his way and he just walked out of the meeting,” he said.

Vice-president Mike Pence, who was also at the meeting, said that the Democratic leaders had been “unwilling to even negotiate to resolve this partial government shutdown or address this crisis at the southern border”.

Just left a meeting with Chuck and Nancy, a total waste of time. I asked what is going to happen in 30 days if I quickly open things up, are you going to approve Border Security which includes a Wall or Steel Barrier? Nancy said, NO. I said bye-bye, nothing else works!

“Hundreds of thousands of workers . . . are as disappointed as we are,” he told reporters, as he confirmed that Mr Trump walked out of the meeting.

“He is going to stand firm to achieve his priorities, to build a wall, a steel barrier on the southern border . . . to stem the crisis that we face on our southern border.”

The deteriorating relations between the White House and congressional Democrats over Mr Trump’s request for funding for his proposed wall unfolded a day after Mr Trump gave a rare primetime television address from the Oval Office. During the address he warned that the US faced a security and humanitarian crisis on its southern border. But he stopped short of declaring a national emergency on the issue in the widely-anticipated address to the nation.

However, on Wednesday he again threatened to invoke national emergency powers if he does not get the money he wants to build the wall.

When asked at an event in the Oval Office earlier in the day about invoking a national emergency, he said: “I may go that route.

“I have the absolute right to do a national emergency if I want.”

He said that if Congress didn’t provide funding for the wall, “we’ll go about it in a different manner”.

He also spoke at length of the need for a border wall. “They say it’s a medieval solution. It’s true. It’s medieval because it worked then and it works even better now,” he said. “Israel put up a wall, 99.9 per cent successful . . . they don’t have a problem anymore.”

With Mr Trump due to visit the US-Mexico border in Texas on Thursday, the White House and Democrats seem as far apart as ever on reaching a compromise on funding for border security that would end the government shutdown which is now in its third week.