Greek government set to ride out anger over Macedonia deal 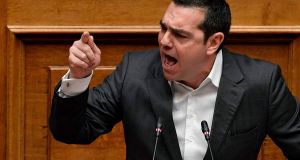 Greek prime minister Alexis Tsipras speaking in parliament on Tuesday. He is expected to retain power and press on with ratification of the accord. Photograph: Louisa Gouliamaki/AFP/Getty Images

The Greek government is expected to survive a confidence vote on Wednesday, amid continuing domestic and international fallout from a historic agreement to change the name of neighbouring Macedonia.

Greece’s ruling coalition split after Macedonia’s parliament voted last Friday to adopt the name “North Macedonia”, as part of a deal that would see Athens drop its veto on the ex-Yugoslav republic’s bid to join Nato and the European Union.

Since Macedonia gained independence in 1991, Athens has opposed its use of the same name as a region of northern Greece, and right-wing defence minister Panos Kammenos resigned from the Greek government on Sunday in protest at the deal.

Several deputies from his Independent Greeks party are expected to back the government in a confidence vote, however, and help leftist prime minister Alexis Tsipras retain power and press on with ratification of the accord.

Analysts say the Greek parliament is likely to approve the so-called Prespa agreement by March, which would allow the renamed North Macedonia to join Nato and start EU accession talks this year.

The pact – which was signed at Lake Prespa on the Greece-Macedonia border last June – is fiercely opposed by nationalists in both states and by Russia, which is striving to retain influence in the Balkans.

Most countries in the region are members of, or want to join, the EU and Nato, and on Monday Russia said the Macedonian parliament’s approval of the name deal was part of western efforts to “forcibly drag Skopje into Nato”.

“This is happening in violation of Macedonia law. The positions of the head of the Republic of Macedonia and the view of the majority of its population, who oppose the Prespa agreement, are being ignored,” Moscow’s foreign ministry said.

Macedonia’s nationalist president Gjorge Ivanov rejects the deal and turnout at a referendum on the pact last September fell well short of the 50 per cent required for the vote to be legally valid.

The Russian foreign ministry called Mr Kammenos’s resignation further evidence of “the explosiveness of the situation, which threatens to undermine stability and security in the Balkans”.

“It is noteworthy that in Athens the Prespa agreement is being pushed through regardless of the opinion of the country’s citizens,” Moscow added.

Last summer, Greece expelled two Russian diplomats and barred two other Russians from the country for fomenting opposition to the deal with Macedonia.

Athens’ foreign ministry said Moscow’s latest comments were “not in line with the level of relations between Greece and Russia and the long-standing ties of friendship between our peoples” and urged Russia to “refrain from such statements, which constitute an intervention in Greece’s internal affairs”.

The Kremlin’s Balkan ambitions will be in focus when Russian president Vladimir Putin visits Serbia on Thursday.