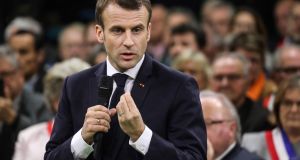 Emmanuel Macron was once a young man in a hurry. At the opening session of a two-month “great national debate” on Tuesday, the mayors of 600 towns and villages in Normandy forced the French president to slow down, listen and communicate.

The debate is Mr Macron’s attempt to defuse the gilets jaunes crisis, which has seen two months of demonstrations and rioting. For more than six hours in the gymnasium of the small town of Grand Bourgtheroulde, the debate ranged from gripe session to lesson in participative democracy. The president addressed every issue that ails France.

At moments of virulent criticism, Mr Macron’s jaw clenched. He took notes atop a bound cahier de doléances comprising complaints filed by 110 citizens, a gift from the local mayor. Each time the mayors finished speaking, Mr Macron Macron revisited the points they raised, with energy, humour and wonkish precision.

Mr Macron traced the “democratic fracture” to 2005, when France voted No to the European constitutional treaty, but the treaty was nonetheless ratified by parliament.

“We must refuse violence, because nothing comes of it,” Mr Macron continued. “We must refuse demagogy, because adding up anger never created a solution . . . Tell me what’s on your minds and in your hearts.”

Some mayors were nervous as they read pre-prepared texts. Others were accomplished orators. “We’ll talk as long as the president can stand it,” said Jean-Paul Legendre, the president of the association of mayors of the Eure department.

“I pass about 30 speed radars each day,” Mr Legendre continued. “It’s oppressive. Let us live a little.” He complained that the central government “crushes proximity” by forcing small towns and villages to regroup in larger entities.

Mr Macron laughed heartily when Mr Legendre accidently referred to the ISF, the wealth tax that gilets jaunes rebels want to see reinstated, instead of referring to the DGF for subsidies from the central government. The following speaker, Valéry Beuriot, mayor of Brionne, told Mr Macron he must resolve the “contradiction” between his promise to “put everything on the table” and his refusal to consider re-establishing the ISF.

Other mayors demanded an end to “medical desertification”, as well as access to high-speed internet and more means of transport in the countryside. “We have all felt [your] contemptuousness,” said an articulate mayor of a small town. “I didn’t go to the ENA, so I don’t know everything,” she continued, alluding to the training ground for France’s elite which Mr Macron attended.

On his way to Grand-Bourgtheroulde, Mr Macron stopped at the town hall in Gasny, a commune with a population of 3,000. “We are going to help people in difficult situations take responsibility for themselves,” Mr Macron said away from the cameras. “Some make efforts, and some act stupid.”