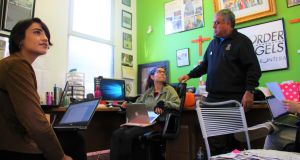 Hugo Castro rubs his temples before joining the sea of evening rush-hour traffic that snakes all the way from San Diego to the Mexican border. The beat-up Jeep Cherokee he drives has 290,000 miles on the clock and is crammed with donated goods – sacks of rice, nappies, first-aid kits, chicken stock and T-shirts that arrived from a donor in Indiana that morning – that are destined for migrant shelters in Tijuana.

“A lot of the migrants we help came recently with the caravans from Central America,” he says. “But some are people who were deported [from the US] years ago and have nowhere else to go.”

Castro leads relief efforts in Tijuana for Border Angels, a San Diego-based volunteer group that provides aid for migrants on both sides of the US-Mexico border. Founded in 1986 by Enrique Morones, the charity started out by gathering teams of volunteers to drop water containers in desert border regions used by migrants attempting to enter the US, an activity the organisation continues today.

As the sun fades on this warm January evening, Castro pulls into a control stop at the San Ysidro border crossing, where he spends 15 minutes documenting the donated goods with a customs agent. Soon, the huge border fence is behind him and within minutes he has made his first stop in Tijuana, a small camp of about 20 tents that cover a tiny plaza.

He stops at two more migrant shelters in the dilapidated neighbourhoods close to the border – one that welcomes LGBT migrants and another that serves as the overflow from a larger shelter recently flooded by heavy rain – before stopping by the Border Angels depot in Playas de Tijuana close to the Pacific Ocean.

Many of the migrants visited are part of the caravan groups hoping to enter the US that have drawn the ire of president Donald Trump, who is demanding that Congress back funding for the construction of a US-Mexico border wall.

Despite the political furore in Washington, DC, over the border wall issue, which has fuelled an ongoing partial government shutdown, detentions at the Mexican border are at a 17-year low.

In the final year of Barack Obama’s administration, 329 people died at the southwestern US-Mexico border; in the first year of president Trump’s government, the number fell to 294.

Last year, it dropped again, to 260 people, according to an unclassified government report obtained by ABC News. Fifty deaths were recorded as being “water-related”, 27 were skeletal remains found by border agents and a large but unspecified number were attributed to heat exposure.

But while the total number of deaths is down, the number of “family units” detained at the southwestern border reached a record high of 25,172 in November.

The number of people seeking asylum in the US increased by 70 per cent to almost 93,000 last year, though only 40 to 100 applications are processed daily by officers at the Mexican border.

“What migrants in Mexico need most is to know the truth, the legal realities they are facing when they arrive at the US border,” says Morones. On the first Sunday of every month lawyers hold free advice sessions, organised by Border Angels, for migrants in Tijuana. “A lot of the American public say, ‘They should get in line’ – there is no line. Those who have applied for asylum – Trump’s not honouring that process,” says Morones.

Increasingly, Border Angels’ services are in demand on US soil, too.

Fox News, USA Today and other media outlets have reported that, since October, the department of homeland security has been releasing large groups of asylum seekers on to the streets of US border cities, leading to a swell in the migrants left wandering city streets in San Diego, El Paso, and elsewhere who have little idea of what to do next.

Migrant advocates say asylum seekers already in the US are increasingly left to fend for themselves while they await court hearings that are often months, even years, down the road. “They’re just dropped off at a bus station or a McDonald’s,” says Morones. “Sometimes [the migrants] don’t even speak Spanish – they speak indigenous languages.”

He says that in the past immigration officials used to let him know when and where processed asylum seekers were to be released. “We’d meet them, take them to the train station or set them up with their families elsewhere in the US. That’s not happening now, now they’re just dumping them,” says Morones.

US Immigration and Customs Enforcement officials were unable to comment on this as the ongoing government shutdown prohibits them from working.

With a core group of about 20 volunteers, Morones says support for Border Angels has grown significantly across the US and internationally in recent months. Celebrities such as Anne Hathaway and Ellen DeGeneres, and some from Hispanic backgrounds , have helped raise funds and draw attention to the plight facing migrants.

But it’s an ongoing struggle. “The migrants need stability,” says Babette Pages, who travelled from Barcelona in September to volunteer with Border Angels in San Diego. “There are shelters [in Tijuana] where people have no electricity, no access to running water.”