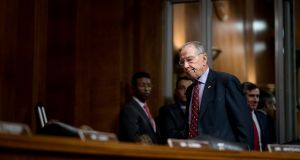 A dramatic last-minute demand by Republican senator Jeff Flake prompted US president Donald Trump to order an FBI investigation into his supreme court nominee Brett Kavanaugh over sexual misconduct allegations that have riveted the country and imperiled his confirmation chances.

The US Senate agreed on Friday to delay a vote on the nomination of Mr Kavanaugh by up to a week to allow for a limited FBI investigation into sexual assault allegations against the supreme court nominee. Mr Trump then granted that request.

A day after explosive testimony on Capitol Hill which saw Christine Blasey Ford accuse Mr Kavanaugh of sexual assault, the Senate agreed to proceed with a procedural vote on Saturday. But a full vote by the 100-member chamber will not take place for another week to allow an FBI background investigation into the allegations.

The decision was taken after Senator Jeff Flake demanded one week’s delay in exchange for supporting Mr Kavanaugh. The 21-member Senate judiciary committee – including Mr Flake – voted to send Mr Kavanaugh’s nomination to the Senate floor, by 11 to 10.

While the scope of the FBI background investigation is not clear, it is likely to focus solely on Dr Blasey Ford’s allegations.

In what could be a significant development, Mark Judge, a friend of Mr Kavanaugh who Dr Blasey Ford says witnessed the sexual assault, indicated that he is willing to answer FBI questions.

As the future of Mr Kavanaugh’s nomination remained uncertain, Washington reeled from one of the most acrimonious and divisive public hearings in recent memory.

In nine hours of testimony on Thursday Mr Kavanaugh and his accuser delivered widely contradictory testimony to the committee. At stake is the future political direction of the US supreme court. Mr Kavanaugh has been nominated to take the place of Justice Anthony Kennedy who retired this summer. While Mr Kennedy was effectively the swing-vote on the nine-member court, often taking more liberal positions than his conservative peers, Mr Kavanaugh is expected to be a more conservative justice. Pro-choice campaigners in particular are concerned that Mr Kavanaugh’s appointment could eventually lead to the overturning of Roe v Wade, the landmark 1973 ruling legalising abortion.

While president Trump described Mr Kavanaugh’s combative and emotional testimony on Thursday as “powerful, honest and riveting”, on Friday he struck a more restrained tone.

Asked what he thought of Dr Blasey Ford, he said she was a “very credible witness”.

“I thought her testimony was very compelling and she looks like a very fine woman to me.”

Mr Kavanaugh’s political future could ultimately come down to a handful of senators – Susan Collins of Maine and Lisa Murkowski of Alaska have not yet indicated if they will endorse Mr Trump’s nominee. While acceding to demands for an FBI investigation could give political cover to these senators if they want to vote for Mr Kavanaugh, delaying the vote also brings considerable risks allowing the possibility of new developments to emerge.