Trump portrays mid-term elections as poll on him and agenda 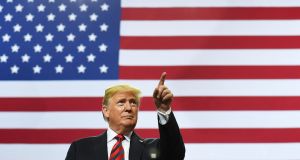 President Trump told the Missouri crowd that federal law enforcement was defective and he pledged to root out the “real bad ones”. Photograph: Getty Images

US president Donald Trump has cast the mid-term elections as a referendum on him and his agenda.

The president told a Missouri rally that a vote for any Democrat would empower “dangerous” and “crazy” people and sap the Republican Party’s fragile congressional majorities.

He also continued his attacks on federal law enforcement, promising to root out the “real bad ones” and eliminate the “lingering stench” at the Justice Department. In detailing his complaints about federal law enforcement, he appeared to allude to a New York Times article published earlier in the day that reported that Rod Rosenstein, the deputy attorney general, suggested last year that he secretly record Trump and that he discussed recruiting Cabinet members about removing Trump from office for being unfit.

His remarks capped a week in which he ratcheted up complaints about attorney general Jeff Sessions, casting some federal law enforcement officers as a “cancer on the country”.

Mr Trump came to Missouri – a state he won by 19 percentage points in 2016 – to boost Josh Hawley, the Republican attorney general who is challenging senator Claire McCaskill, a Democrat, in a race that Republicans regard as one of their best opportunities this year to pick up a Democratic seat. Polls show the two neck and neck. The outcome could be critical in determining who controls the Senate, where Republicans hold a 51-49 edge.

“Get out in 2018, because you’re voting for me in 2018,” Mr Trump told thousands of supporters in the JQH Arena, on the campus of Missouri State University. “They aren’t just extreme,” he said of Democrats. “They are frankly dangerous, and they are crazy.”

Mr Hawley had only five minutes at the lectern, which he spent effusively praising Mr Trump and savaging Ms McCaskill for not being supportive of the president.

The dynamic reflected the strategy Trump has embraced as he campaigns for Republicans this year, hoping to transfer his own popularity among core party supporters to candidates who need a highly motivated base of voters to succeed. But it carries risks as well; the president’s popularity here has declined since 2016, with a recent NBC News/Marist poll showing his unfavourable rating at 50 per cent. And Republicans concede that his unique brand of popularity may not be transmittable to others on the ballot. – New York Times