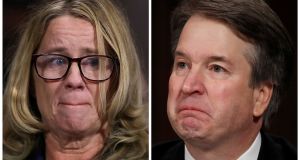 Senior representatives of the legal profession have urged the US Senate to delay a vote on Brett Kavanaugh’s nomination to the supreme court, following Christine Blasey Ford’s testimony to the Senate judiciary committee on Thursday.

The American Bar Association (ABA) said the vote should be postponed so that the FBI can investigate sexual assault and misconduct allegations made against Mr Kavanaugh by Dr Blasey Ford and other women.

Both Mr Kavanaugh and Republican senator Lindsey Graham had quoted the ABA’s support of US president Donald Trump’s nominee to the court during Thursday’s hearing.

But in a letter sent to the judiciary committee after the hearing, the president of the association, Robert Carlson, said a vote should take place “only after an appropriate background check into the allegations made by Prof Ford and others is completed by the Federal Bureau of Investigation”.

“We make this request because of the ABA’s respect for the rule of law and due process under law. The basic principles that underscore the Senate’s constitutional duty of advice and consent on federal judicial nominees require nothing less than a careful examination of the accusations and facts by the FBI,” he said.

The dean of Yale Law School, which Mr Kavanaugh attended, also weighed into the controversy. “Proceeding with the confirmation process without further investigation is not in the best interest of the court or our profession,” Heather K Gerken said on Friday.

The official magazine of the Jesuits also withdrew its endorsement of Mr Kavanaugh, who was educated at the Jesuit school, Georgetown Prep in Maryland. Mr Kavanaugh’s nomination was “no longer in the best interests of the country”, the editors said in a statement.

As Republican senators huddled in majority leader Mitch McConnell’s Senate office to consider whether to accede to Senator Jeff Flake’s demands to delay a full Senate vote for a week to allow for a limited FBI investigation, Democrats continued to make the case that an FBI investigation was warranted.

Dr Blasey Ford, a California-based university professor, claims Mr Kavanaugh sexually assaulted her in 1982 when he was 17 and she was 15. She gave detailed testimony to the judiciary committee on Thursday. An emotional Mr Kavanaugh denied the allegation in subsequent testimony.

The Democratic members of the committee focused much of their questioning of Mr Kavanaugh on Thursday on the need for an FBI investigation, noting it was standard practice in cases such as these. But Mr Kavanaugh failed to directly answer when asked he would support such an investigation.

Numerous senators also questioned why Mark Judge, the teenager who Dr Blasey Ford says witnessed the alleged assault, had not been subpoenaed by the committee. A lawyer for Mr Judge said on Friday night that he would co-operate with any FBIinvestigation.

Mr Judge is believed to be residing in Delaware. His former girlfriend has indicated that she would be willing to testify that Mr Judge told her about sexual assaults on a drunk woman, though this did not include any reference to Mr Kavanaugh.

In hours of testimony on Thursday, Dr Blasey Ford, a research psychologist, alleged that she was pushed her into a bedroom after she went upstairs to use the bathroom at a house party when they were teenagers.

She said that, after the bedroom door was locked, Mr Kavanaugh pushed her on to the bed, tried to rip her clothes off and put his hand over her mouth as she screamed, while Mr Judge watched. “It was hard for me to breathe and I believed that Brett was going to accidentally kill me,” she said.

She said that she made eye contact a “couple of times” with Mr Judge during the attack and thought he might try to help her – “but he did not.”

She also said she bumped into Mr Judge six to eight weeks after the incident and that he had looked “very uncomfortable”.

Mr Kavanaugh vehemently denied the allegations after he appeared before the Senate committee on Thursday afternoon.

Mr Trump backed his nominee after the testimony, tweeting: “Judge Kavanaugh showed America exactly why I nominated him. His testimony was powerful, honest, and riveting.” He also lambasted what he called the Democrats’ effort to “delay, obstruct and resist”.

But he struck a less triumphalist tone when questioned about the matter in the Oval Office on Friday. Asked what he thought of Dr Blasey Ford’s testimony, he said that she was a “very credible witness”.