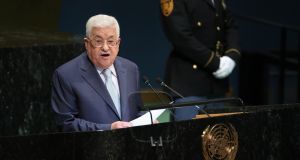 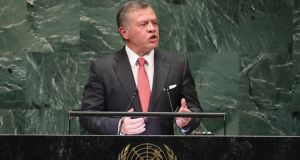 The opening of the UN general assembly in New York provided a platform for Arab critics of Trump administration policies toward the regional peace process to rescue the cash-strapped UN agency caring for five million Palestinian refugees.

In his address to the assembly Palestinian president Mahmoud Abbas urged the White House to reverse recognition of Jerusalem as Israel’s capital and renew funding for Unrwa. He repeated rejection of US mediation in Palestinian-Israeli talks and called for global recognition of the state of Palestine.

He said the administration “has reneged on all previous US commitments and undermined the two-state solution”, providing for the creation of a Palestinian state alongside Israel.

US president Donald Trump has departed from 70 years of international policy on Jerusalem and refugees and from the 1974 UN adoption of “two states for two peoples”. While this formula has been adopted by the international community, the fate of Jerusalem and Palestinian refugees is meant to be resolved in negotiations.

Trump stated, “I like a two-state solution,” but added that he would support a one-state solution if both sides agreed. Since taking office he has touted a “deal of the century” to end the Arab-Israeli conflict but says it could be delayed for four or five months.

Leaked provisions have been rejected by Abbas. Jordan’s King Abdullah condemned the “one-state solution” mentioned by Trump because “the reality is that we’re talking about apartheid” between Israeli Jews and Palestinians.

At a gathering on the assembly sidelines, Unrwa received pledges of $118 million (€101 million) from the EU, Kuwait, Germany, Sweden, Turkey, Japan and other donors to fill the gap in funding left by Trump’s withdrawal of $300 million from the annual US Unrwa contribution of $365 million.

He also cut another $200 million in US Aid funds for humanitarian projects. He vowed there would be no further funding due to Palestinian rejection of his policies.

Unrwa director Pierre Krähenbühl said the fresh funds were “a significant step in overcoming Unrwa’s greatest and gravest financial crisis ever”. Unrwa has yet to raise $68 million for the 2017 budget. Unrwa schools educating 515,260 students were threatened with closure if funds were not found.

Jordan’s foreign minister, Ayman Safadi, said discussions were taking place on long-term Unrwa financing. Unfortunately, such talks have never succeeded and the agency and the refugees have had a hand-to-mouth existence since Unrwa began work in 1950.

The crisis faced by Unrwa is not confined to funding. The World Bank reports Gaza’s economy is in “free fall” and calls for immediate action by Israel to avert “collapse”.

Some 70 per cent of two million Gaza residents are refugees dependent on Unrwa.

The bank blamed Israel’s blockade of the coastal strip, the Palestinian National Authority’s reduction of funds to Gaza ruled by rival Hamas, and the halt in US aid. Bank regional director Marina Wes said Gaza’s economy had “reached a critical point” and frustration had “started spilling over into unrest”.