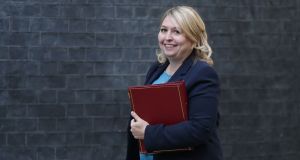 Theresa May’s Chequers plan is the “only proposal” that delivers on Britain’s objective to leave the European Union, the Secretary of State for Northern Ireland has said.

Speaking in Washington DC at the end of a four-day visit to the United States, Karen Bradley said the UK was committed to working with the EU on its concerns about the Chequers deal. But she stressed that is was the only viable option on the table.

Ms Bradley said the UK government wanted to “take control of our laws our border and our money, we’re going to have an independent trade policy, and we’re absolutely committed to no border in the island of Ireland. There’s only one proposal that delivers that and that’s the proposal put forward. There is no other option that delivers on those objectives.”

Ms Bradley said Chequers proposal is “a good deal for Northern Ireland” and a proposal that works for the “island of Ireland.”

Addressing the fall-out from the Salzburg summit when EU leaders rejected Ms May’s plans, Ms Bradley said that Chequers is “not an easy answer for the UK,” noting that the prime minister had lost 13 members of her own government due to the proposal.”

Pressed on how Britain would solve the border challenges in Northern Ireland presented by Brexit, Ms Bradley said: “We cannot see a system where there are two customs territories within a sovereign country,” but she also said that there could be no border on the island of Ireland.

“70.5 million people voted to leave the European Union. As the government we have to respect that vote. We don’t want to stay in the European(Union) by the back door,” she said, adding that the Government was following through on what the British public asked them to deliver.

Her visit coincided with prime minister May’s visit to New York for the United Nations general assembly where she told US business leaders that Britain would have the lowest corporate tax rate in the G20 after Britain leaves the European Union, and would be an attractive, pro-business place to invest.

Ms Bradley met a series of business leaders in Boston, including tech companies Rapid Seven and Black Duck, companies which have invested in Northern Ireland.

She said Britain’s special relationship with the European Union would continue after Brexit.

“The United States is the UK’s closest and more important ally. No two countries in the world do as much and share a much as we do. As the UK does leave the European Union we want to continue building on that incredibly relationship.. so we can stand there as beacons of free trade, beacons of freedom… values that we share.

Noting that Northern Ireland is “a very different place” than 20 years ago when the Good Friday Agreement was signed, she said that 50 per cent of the population is aged 40 or under, unemployment is at record lows and tourism is booming.

“Northern Ireland is a real success story,” she said.