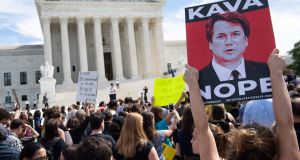 Demonstrators protest against Judge Brett Kavanaugh’s nomination to the US supreme court due to sexual assault claims. Photograph: Saul Loeb

They watched in cafes and bars, in living rooms and kitchens around the country, through  iPhones, live streams and cable TV. On Thursday, millions of Americans stopped what they were doing and turned their attention to the events unfolding in Washington DC.

The nine-hour spectacle was at once compelling and appalling – a real-time drama that will have profound implications for the political hue of the US supreme court for decades to come.

It was a day of two halves. The morning began relatively calmly. Christine Blasey Ford, the university professor who says supreme court nominee Brett Kavanaugh sexually assaulted her in 1982, began her testimony shortly after 10am.

Speaking softly, her voice cracking at times, she chronicled in detail the events that  had “drastically altered” her life. As the hearing progressed she seemed to grow in confidence, calmly answering the questions posed by outside counsel Rachel Mitchell.

By lunchtime, it was clear Republicans were on the back foot. Their strategy of hiring a counsel had appeared to have backfired, as Mitchell failed to make a dent in the accuser’s credibility or land a killer punch. Even Fox News was worried. “This is a disaster for the Republicans,” said veteran commentator Chris Wallace on the station.

On Air Force One, where US president Trump was watching the testimony on a slight delay as he returned to Washington from New York, the mood was sombre. After all, a day earlier, Trump had suggested in a press conference that he could be swayed to change his mind on nominating Kavanaugh to the supreme court, depending on the testimony. “I’m going to see what happens.”

But after the lunchtime recess, the mood changed. There were hints of what was to come as Senator Lindsey Graham gave an impromptu press conference in the hall outside the committee room. Lambasting Democrats for an “ambush”, he questioned Blasey Ford’s credibility, saying he had no further insight into “where or when” the alleged assault happened.

Within seconds of Kavanaugh entering the room it was clear that he was going on the attack.

Gone was the saccharine persona seen in the Fox News interview earlier in the week or the polished, prepared supreme court nominee who had presented himself to the committee in previous hearings.

Instead Kavanaugh launched a blistering attack on those he accused of orchestrating a politically motivated campaign against him, in the process fiercely dismissing the claims of sexual assault.

Spurred by the shift in tone and new atmosphere of anger and aggression in the room, the Republican members of the committee threw caution to the wind and sidelined the outside prosecutor, instead taking it upon themselves to question Kavanaugh.

One after another they rushed to Kavanaugh’s defence, clambering over one another to chastise their Democratic colleagues.

As the hearing finished, cheers went up in bars popular with Republicans near Capitol Hill. Within minutes Trump had made it clear where he stood: “Judge Kavanaugh showed America exactly why I nominated him. His testimony was powerful, honest, and riveting.”

Whatever the rights and wrongs of the case against Kavanaugh, Thursday’s showdown was an ugly mirror of what America has become.

Torn, divided, bitterly conflicted, the extraordinary events that unfolded in the Senate – once the great deliberative chamber of the US government – were a measure of the ruptures in American society that have burst into the open.

Though partisanship has always infected the US supreme court nomination process, at Thursday’s hearing there was not so much as an attempt to give some semblance of impartiality or bipartisanship. Among the most worrying aspects of the testimony was Kavanaugh’s blatant play to the Republican base in his opening testimony, claiming he was the victim of a “calculated and orchestrated political hit” fuelled by “pent-up anger at President Trump and the 2016 election” and “revenge on behalf of the Clintons”.

If confirmed, Kavanaugh will undoubtedly face questions about his judicial and political independence in the highest court in the land, given his extraordinary self-identification as Republican during his testimony.

Lindsey Graham’s outrage at what he termed a Democratic ploy to subvert Trump’s nominee is audacious given that Republicans blocked then president Barack Obama’s nominee to replace Antonin Scalia for more than a year, effectively depriving the second-term president of his constitutional right to nominate a justice.

With Republicans now within touching distance of securing a second conservative justice on the nine-member supreme court, Thursday’s unseemly spectacle was for them evidently a price worth paying for tilting the court to the right for years to come.