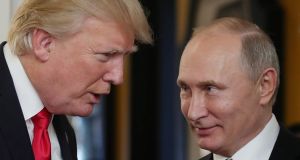 Donald Trump claimed on Sunday that no one had told him about a Russian plot to offer bounties to Taliban militants in exchange for fatal attacks on coalition troops in Afghanistan, though US security officials have been weighing a response to the plot since at least March.

Top administration officials, including members of the US president’s national security council, have been discussing the Russian bounty offer for months, the New York Times first reported. But in a tweet Sunday morning, Mr Trump claimed never to have heard about the Russian offer – and he questioned whether such an offer had been made.

“Nobody briefed or told me, [vice president Mike] Pence, or chief of staff Mark Meadows about the so-called attacks on our troops in Afghanistan by Russians,” Mr Trump tweeted in part. “Everybody is denying it & there have not been many attacks on us . . .”

Mr Meadows took over as chief of staff at the end of March, after the national security council, which includes top advisers to the president with offices inside the White House, convened an inter-agency meeting to discuss taking action on the intelligence reports, according to the New York Times.

Joe Biden, Mr Trump’s presidential rival, accused the president in a virtual town hall meeting on Saturday of betraying US troops by failing to act on the intelligence reports.

“Not only has he failed to sanction or impose any kind of consequences on Russia for this egregious violation of international law, Donald Trump has continued his embarrassing campaign of deference and debasing himself before Vladimir Putin, ” Mr Biden said.

“His entire presidency has been a gift to Putin, but this is beyond the pale. It’s a betrayal of the most sacred duty we bear as a nation, to protect and equip our troops when we send them into harm’s way.”

A Russian military intelligence unit secretly offered cash to Taliban-linked militants for successful attacks on coalition forces in the autumn of 2019, as the US and Taliban engaged in talks to end a decades-long war, according to widely reported US intelligence assessments.

Some bounty money was believed to have been collected. Twenty Americans were killed in combat in Afghanistan in 2019.

But the White House press secretary, the director of national intelligence (DNI), and now the president himself all denied at the weekend that news of a secret Russian paid assassinations plot against US troops ever made it to Trump’s inner circle.

“I have confirmed that neither the president nor the vice president were ever briefed on any intelligence alleged by the New York Times in its reporting yesterday,” intelligence director John Ratcliffe said in a statement Saturday. “The White House statement addressing this issue earlier today, which denied such a briefing occurred, was accurate.”

House of Representatives speaker Nancy Pelosi, a Democrat, said on ABC’s This Week TV programme on Sunday that it was “totally outrageous” that Mr Trump had not acted on the intelligence reports to defend American lives. “This is as bad as it gets, and yet the president will not confront the Russians on this score,” Ms Pelosi said.

White House press secretary Kayleigh McEnany issued a statement Saturday denying that Mr Trump had been briefed but saying “this does not speak to the merit of the alleged intelligence”.

The White House has not explained why the president would not be briefed on a plot to kill US soldiers deployed overseas.

“Either the DNI is lying (which is a massive problem) or the DNI withheld earthshaking information from President Trump because he is so infantile and irrelevant that they’d rather he not know (which is ... well ... also a massive problem),” tweeted Connecticut senator Chris Murphy, a Democrat.

The former acting director of national intelligence, Richard Grenell, who served the Trump administration, suggested on Sunday that the reports about the intelligence assessment were wrong. “No one would be fine with this if it were true,” Mr Grenell tweeted.

Both the Russian foreign ministry and the Taliban issued statements denying the plot.

“This unsophisticated plant clearly illustrates the low intellectual abilities of the propagandists of American intelligence, who instead of inventing something more plausible have to make up this nonsense,” the Russian foreign ministry said.

A Taliban spokesman said the militants “strongly reject this allegation and are not indebted to the beneficence of any intelligence organ or foreign country”. – Guardian