EU prepares to knuckle down for summer of Brexit talks 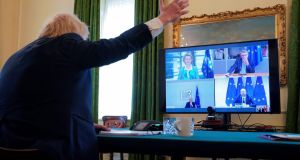 The European Union is preparing to redouble efforts and work through the summer to hammer out a deal with Britain following a meeting between prime minister Boris Johnson and EU leaders on Monday.

European Commission president Ursula von der Leyen, European Council president Charles Michel and David Sassoli, president of the European Parliament, held a video conference with the British leader to take stock of the lack of progress in the talks, with just six months remaining before barriers to trade between Britain and its neighbours make an abrupt return, after decades spent removing them.

The political leadership on both sides sent the message to their negotiators to go back over the areas where they had encountered stumbling blocks and try again to see if they can inch their way to a compromise that would avoid the most drastic ‘no trade deal’ option.

The mood in Brussels was upbeat towards the prospects of reaching a deal following the meeting, with those working close to the negotiations expecting a summer of late-night marathon talks that would likely run through the traditional holiday period.

Britain had initially briefed that it would abandon attempts to find a deal at this stage if it felt insufficient progress had been made, and focus its work instead on preparing for an automatic switch from January 1st to World Trade Organisation terms – a global default system of tariffs expected to cause a significant blow to trade.

London’s shift away from this position and commitment to the talks has been taken as an indication that a deal can be found.

In a joint statement following the meeting, both sides committed to “create the most conducive conditions for concluding and ratifying a deal before the end of 2020”.

“The parties underlined their intention to work hard to deliver a relationship which would work in the interests of the citizens of the union and of the United Kingdom, ” the joint statement read. “They also confirmed their commitment to the full and timely implementation of the withdrawal agreement.”

The two sides have agreed to six rounds of negotiations between June 29th and August 21st, held physically if possible and alternating between London and Brussels. Since February, negotiations have been over video conference because of the pandemic, ruling out informal side chats that often help find common ground.

On policing and security co-operation, a way through could be possible, as the EU is open to workarounds through the international policing co-operation body Interpol. However, this would be a far more distant kind of co-operation than once hoped for.

The British side has bridled at insistence by the EU that the deal should contain a commitment to uphold the Paris Climate Accord, insisting that this goes far beyond the stipulations of past trade deals. But in the EU’s view, modern-day trade deals have evolved to include such commitments, and they are appropriate because Britain is a like-minded country that has signed up to the agreement anyway.