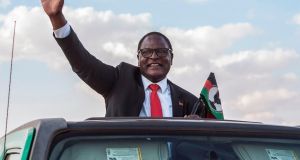 Lazarus Chakwera, a Pentecostal pastor-turned-politician, was inaugurated as Malawi’s president after winning the first opposition victory in an election rerun in African history.

Mr Chakwera took the oath of office in Lilongwe, the landlocked south-east African nation’s capital, on Sunday. He defeated incumbent Peter Mutharika with 58 per cent of the vote following Tuesday’s poll.

Malawian judges ordered a rerun after they ruled that fraud, including the use of Tipp-Ex correction fluid to alter tallies, marred Mr Mutharika’s re-election a year ago.

Mr Mutharika called the new vote “the worst in Malawi’s history of our elections”, but called on Malawians to accept the result.

A former pastor in the Assemblies of God, the world’s largest Pentecostal denomination, he has pledged to raise the minimum wage, create one million jobs and reduce the cost of fertiliser.

“Lazarus rises,” Malawi’s Weekend Nation newspaper said on Sunday, after what analysts had called a second chance for one of the world’s poorest countries, where GDP per capita is below $400 (€356). Many of Malawi’s population of 18 million are subsistence farmers and the economy depends on tobacco and tea exports.

The rerun was held after months of street protests under the army’s protection added to the courts’ mandate to vote again. “The courts have really stood up to defend democracy, but so [has] civil society,” Boniface Dulani, a pollster and political scientist at the University of Malawi, said.

The opposition united behind Mr Chakwera after judges said that the rerun’s winner would have to garner more than half the vote, replacing a first past the post system.

“It tells us that political will and leadership can achieve a great amount ... this will be a bit of a shot in the arm for democracy” in the region, said Nic Cheeseman, a professor and African politics expert at the University of Birmingham.

Kenyan judges ordered Africa’s first rerun of a presidential vote in 2017 when they overturned Uhuru Kenyatta’s initial victory in a poll marred by fraud. However, the rerun failed to resolve political tensions after Mr Kenyatta’s main opponent boycotted the new poll.

Malawi successfully held Africa’s first contested rerun despite last-minute legal manoeuvres by Mr Mutharika to delay it. New leadership at the country’s electoral commission was appointed with weeks to spare. The short notice also meant that international observers were absent.

“They had less money, less international support and less time than last time, and yet they appear to have done it better. This is very much a domestic success story,” said Mr Cheeseman.

Mr Chakwera, the son of a farmer, leads the Malawi Congress party that ruled during the 27-year dictatorship of Hastings Banda, which was ended by the country’s first multi-party elections in 1994.

He formed an alliance for the rerun with Saulos Chilima, Mr Mutharika’s estranged vice-president, who will now be Mr Chakwera’s deputy.

They have pledged an end to the corruption scandals and nepotism that plagued Mr Mutharika’s term. – Copyright The Financial Times Limited 2020