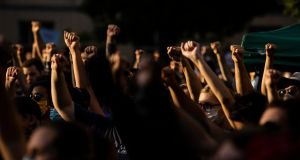 A crowd had gathered in Louisville on Saturday to protest the death of black woman Breonna Taylor. File photograph: Getty Images

Authorities are investigating a fatal shooting at a demonstration against a black woman’s death in Kentucky’s Louisville, the city’s police said.

A crowd had gathered to protest the death of black woman Breonna Taylor, who was shot eight times by officers who burst into her Louisville home using a no-knock warrant during a March 13th narcotics investigation. No drugs were found at her home.

Louisville Metro police said in a statement that there were reports of shots fired in Jefferson Square Park about 9pm on Saturday, adding that there were also calls saying the Jefferson County Sheriff’s Department tried to resuscitate a man who later died.

Another shooting victim was taken to hospital with non-life-threatening injuries, police said.

Video posted on social media appeared to show a man opening fire into the park as people scrambled for cover.

Police said officers cleared the park and were “trying to gather as much information as possible in order to identify all who were involved in the incident,” the statement said.

No information about arrests, possible suspects and the victims’ identities and ages was immediately released.

The incident comes as the US president said he had signed an executive order to protect monuments, memorials and statues targeted by anti-racism protesters.

Donald Trump used Twitter to call for the arrest of protesters involved in an attempt to pull down the statue of Andrew Jackson from a park directly in front of the White House.

Also on Saturday, Mississippi legislators took the first steps toward erasing the Confederate battle emblem from the state flag, a symbol that has come under intensifying criticism amid the nationwide demonstrations.

Meanwhile, the protest in Louisville came after the city’s mayor announced one of the three police officers involved in Ms Taylor’s death will be fired.

Sam Aguiar, a lawyer for Ms Taylor’s family said the move was overdue.

“It’s about damn time. It should have happened a long time ago, but thankfully it’s at least happening now,” Mr Aguiar said.