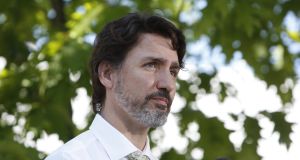 China lashed out at Canada on Saturday over criticism about Chinese prosecution of two Canadians, saying the matter is based on evidence and urging Ottawa to cease “megaphone diplomacy.”

In a website post, a representative of the Chinese embassy in Ottawa criticised recent “irresponsible remarks” by Canadian leaders.

“The facts are clear and evidence solid and sufficient. The accusation of so-called ‘arbitrarily’ detaining Canadian citizens is totally groundless,” the post said.

The embassy spokesperson said Meng’s arrest is the true arbitrary detention, and repeated Beijing’s call for her release.

“Stop making irresponsible remarks on cases of Michael Kovrig and Michael Spavor, and exerting pressure on China through megaphone diplomacy.”

Spokespersons for Trudeau and deputy prime minister Chrystia Freeland could not immediately be reached.

Kovrig’s wife asked this week that the Canadian justice minister consider intervening in the Chinese executive’s extradition case to try and free the two Canadians.

Trudeau has said exchanging Meng for the two men would weaken Canada’s values and justice system.