Coronavirus surges in US as Mike Pence cancels campaign events 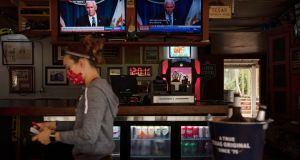 The number of confirmed US cases of the virus rose to more than 2.5 million on Saturday, according to a Reuters tally. More than 125,000 Americans have died of Covid-19, the highest known death toll of any country in the world.

Florida on Saturday morning reported 9,585 new infections in the last 24 hours, a record for a second day, while Arizona recorded 3,591 new cases, matching its prior record on Tuesday.

Mr Pence cancelled planned events to campaign for president Donald Trump’s re-election next week in Florida and Arizona out of “an abundance of caution,” campaign officials told Reuters.

The surge in cases has been most pronounced in a handful of southern and western states that reopened earlier and more aggressively, serving as a warning to the potentially illusory nature of any perceived progress in controlling the virus.

For the third consecutive day, new US cases rose by more than 40,000 on Saturday. The United States has now seen 2.52 million cases since the pandemic began, according to the Reuters tally.

The worsening contagion in some parts of the United States has created a split-screen effect, with New York and its neighbouring Northeastern states, which were hit hardest initially, reporting declining cases and forging ahead with reopening plans.

Kami Kim, director of the Division of Infectious Disease and International Medicine at the University of South Florida, said her state’s leaders claimed victory too soon after lockdowns were lifted starting in early May, while giving off conflicting messages on face coverings by not wearing masks themselves.

“It was just complete denial by a huge swath of the politicians,” she said, predicting that the state may need to shut down again. “Unfortunately, our community still isn’t taking it very seriously. People aren’t wearing masks.”

Washington state governor Jay Inslee said on Saturday that his state would pause moving into the next stages of opening its economy as cases there rise.

In Texas, a state that was on the vanguard of letting people get back to work, Texas governor Greg Abbott ordered bars across the state to close and required restaurants to limit indoor seating, acknowledging that in hindsight he had opened bars too soon.

Despite skyrocketing case numbers, both Mr Abbott and Florida governor Ron DeSantis have not bowed to pressure to issue statewide mandates on wearing masks, opting to leave that decision to local municipalities. Both Mr Abbott and Mr DeSantis are Republican. – Reuters

1 Health officials ‘very concerned’ about foreign travel, says Donnelly
2 Michelle O’Neill will not step aside ‘under any circumstances’ despite calls from other parties after Storey funeral
3 World, look away now – these are dark days for the United States
4 ‘Grossly irresponsible’- Waterford mayor condemns house party of 60 people
5 Bobby Storey: The IRA's planner and enforcer who stayed in the shadows
Real news has value SUBSCRIBE