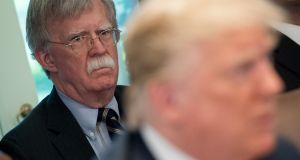 US president Donald Trump speaks alongside US national security adviser John Bolton (L) during a cabinet meeting in the Cabinet Room of the White House in Washington DC, in May 2018. File photograph: Saul Loeb/AFP via Getty Images

John Bolton said Donald Trump posed “a danger for the republic” if re-elected, in a scathing interview on US television on Sunday night.

Mr Bolton, who left the White House after serving for 17 months as Mr Trump’s national security adviser, described the US president as “erratic and impulsive”, “stunningly uninformed”, “irrational” and motivated only by his desire to be re-elected.

He said Mr Trump was “played like a fiddle” by Russia’s Vladimir Putin and could be manipulated by other foreign adversaries, including China and North Korea.

“This is a danger for the republic,” he told ABC News.

Mr Bolton said he hoped Mr Trump would be remembered as a “one-term president who didn’t plunge the country irretrievably into a downward spiral we can’t recall from”.

“The concern I have, speaking as a conservative Republican, is that once the election is over, if the president wins, the political constraint is gone,” Mr Bolton said in his first television interview since leaving the White House.

“And because he has no philosophical grounding, there’s no telling what will happen in a second term.”

Mr Bolton appeared on television in advance of the publication on Tuesday of his book The Room Where it Happened: A White House Memoir. The Trump administration last week failed in a court attempt to block publication of the book.

Mr Bolton was damning about Mr Trump’s erratic decision-making and poor grasp of foreign policy issues. He said the House should have investigated Mr Trump not only for his actions in Ukraine but for his willingness to intervene in criminal investigations on behalf of foreign rulers, too.

Mr Bolton insisted that the president had withheld military aid from Ukraine unless they investigated Democratic presidential challenger Joe Biden - the question at the heart of the House impeachment inquiry. Asked whether the president was lying when he took to Twitter to deny telling Mr Bolton this, the former national security adviser replied: “Yes he is. And it’s not the first time, either.”

Mr Bolton, who held hawkish foreign policy views throughout his time in the administration, accused the president of attempting to pursue a deal on denuclearisation with North Korea without understanding the significance of what he was giving away.

He said the threat from North Korea today was “absolutely greater” than when Mr Trump took office and began meeting with Kim Jong-un. “Because while all these photo opportunities were taking place, there’s absolutely no doubt that North Korea’s work on both its nuclear and ballistic missile programmes continued,” he said.

“When you’re dealing with somebody like Putin, who has made his life understanding Russia’s strategic position in the world - against Donald Trump, who doesn’t enjoy reading about these issues or learning about them - it’s a very difficult position for America to be in,” said Mr Bolton.

“I think we’re in a weaker position around the world. I think we have given up leadership in a wide variety of areas.”

Mr Bolton said he would not vote for Mr Trump in November, adding: “I don’t think he’s a conservative Republican.”

When asked why he stayed in the administration so long, Mr Bolton said: “I overrated the chances to make this into a coherent, rational, systematic, decision-making process, to advance American interests . . . That turned out not to be right.”

Critics have said the former national security adviser should have testified before the House impeachment inquiry. At the time, Mr Bolton said he would only testify if ordered to by subpoena. – Copyright The Financial Times Limited 20