Tiger in the Bronx tests positive for coronavirus

Six other large cats fall ill at New York zoo, believed to have been infected by employee

A positive coronavirus test in a four-year-old Malayan tiger named Nadia at the Bronx Zoo raises new questions about transmission of the virus in animals. Video: Reuters 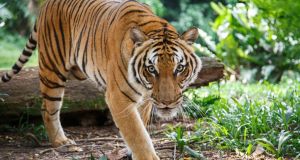 A positive coronavirus test in a tiger in the US raises new questions about transmission of the virus in animals. File photograph: Getty Images

A four-year-old Malayan tiger named Nadia at the Bronx Zoo has become what is believed to be the first animal to test positive in the US, authorities said.

Nadia and six other tigers and lions that have also fallen ill are believed to have been infected by a zoo employee who was not yet showing symptoms, the zoo said.

The finding raises new questions about transmission of the virus in animals. The US Department of Agriculture, which confirmed Nadia’s test result at its veterinary lab, says there are no known cases of the virus in US pets or livestock.

“There doesn’t appear to be, at this time, any evidence that suggests that the animals can spread the virus to people or that they can be a source of the infection in the United States, ” said Dr Jane Rooney, a veterinarian and a USDA official.

The USDA said it is not recommending routine coronavirus testing of animals, in zoos or elsewhere, or of zoo employees.

The coronavirus outbreaks around the world are driven by person-to-person transmission, experts say.

More than 336,000 people have tested positive for Covid-19 and more than 9,500 have died in the United States, according to a Reuters tally. – Agencies