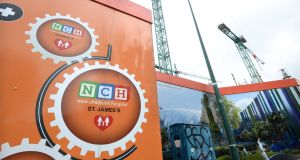 Construction collapsed at record speed to its lowest level in 11 years as Covid-19 restrictions halted building across the Republic last month, the latest figures show.

Work on big projects – including the National Children’s Hospital, Grangegorman Technological University Campus, new roads such as the Macroom-Ballyvourney route in Co Cork – and house-building stalled across the Republic last week, hitting up to 30,000 jobs.

Figures published on Monday show that construction fell sharply in March, hitting its lowest level since a recession came close to wiping out the industry 11 years ago.

The index, which follows the sector’s performance every month, fell to 28.9 in March from 50.6 in February, indicating that the industry virtually collapsed.

Ulster Bank’s PMI takes 50 as its benchmark. Any reading above that figure means that construction expanded on the previous month, while any result below that shows that it shrank.

Simon Barry, chief economist Republic of Ireland at Ulster Bank, blamed the coronavirus pandemic and the Government’s containment measures for the collapse.

“The headline PMI index fell to levels that have only previously been seen at the height of the global financial crisis, with the largest monthly drop in the survey’s 20-year history underscoring the extent of the disruptions faced by Irish construction firms last month,” he said.

Mr Barry warned that the figures painted a bleak picture for the future.

“Notably, the new orders index plummeted to an 11-year low in March as respondents mentioned that the cancellation of projects and company shutdowns contributed to the sharp contraction in new business inflows,” he pointed out.

Employment turned suddenly from “growth to rapid contraction”, Mr Barry confirmed. The index does not show how many jobs were lost, but the industry and trade unions estimate that about 30,000 people work on building sites across the Republic.

Most of those jobs have gone for the duration of the shutdown as only essential work such as road repair and maintenance and a small number of projects, including completing the National Rehabilitation Hospital extension, continue.

Builders are less confident about the future as a result. “Around 45 per cent of respondents anticipate a fall in activity over the coming year as the coronavirus and uncertainty about its duration are leaving a huge mark in construction sector sentiment,” Mr Barry noted.

Initial Government restrictions allowed building to continue, classing it as an essential industry. However, Taoiseach Leo Varadkar included “non-essential” construction in extra measures that he announced in the last week of March.

The earlier decision to allow construction to continue drew fire from unions and other groups. Their representatives argued that it was impossible for workers on building sites to remain the recommended two metres away from each other.