Hungarian prime minister Viktor Orbán has secured the right to rule by decree after his Fidesz party passed a law in parliament granting him open-ended extra powers to fight the coronavirus outbreak. Video: Hungary Parliament TV 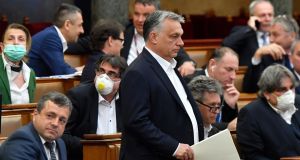 Hungary’s parliament has given its nationalist government sweeping powers to combat the coronavirus pandemic, and effectively handed populist prime minister Viktor Orban the right to rule by decree for an indefinite period.

Deputies voted 137-53 in favour of the Bill, which introduces a jail term of up to five years for anyone found guilty of spreading false information that causes public alarm or hampers efforts to contain the pandemic, and up to eight years for breaking isolation or quarantine rules.

Opposition parties and international rights and press freedom watchdogs say the measures, which forbid the holding of elections, are particularly worrying because they include no time limit: they can only be revoked by parliament, where Mr Orban enjoys an extremely loyal two-thirds majority.

“Just as in wartime, a state of emergency could extend until the end of hostilities,” government spokesman Zoltan Kovacs said on Monday of the Covid-19 outbreak, which is known to have infected 447 people in Hungary and killed 15.

“Today, we confront not a military power but are in a war-like state to defend our people against a pandemic, the likes of which we have not seen in a century,” he added.

Mr Orban insisted that the law on emergency rule “poses no threat to democracy”, but he was assailed by critics at home and abroad who say his 10-year rule has eroded democracy and the rule of law in Hungary, prompting the European Union to take disciplinary and legal action against his government.

“This new law bestows unlimited powers to the government to rule by decree beyond the pandemic,” said David Vig, director of Amnesty International Hungary.

“During his years as prime minister, Viktor Orban has overseen a rollback of human rights in Hungary, stoking up hostility towards marginalised groups and attempting to muzzle Hungary’s critical voices. Allowing his government to rule by decree is likely to speed up this rollback.”

The secretary general of the 47-state Council of Europe, Marija Pejcinovic Buric, wrote to Mr Orban last week to argue that measures taken against Covid-19 should “observe the very essence of democratic principles”.

“An indefinite and uncontrolled state of emergency cannot guarantee that the basic principles of democracy will be observed,” she added.

Mr Orban wrote in reply: “If you are unable to help us in the current crisis, I ask you to at least refrain from hindering our efforts.”

On Hungarian national radio last Friday, he insisted that his government only sought power to respond as quickly as possible to threats posed by the pandemic.

“Saving life depends on quick decisions,” he said. “We do not want to make decisions that the government has no right to make; we just want certain decisions to be made quickly.”